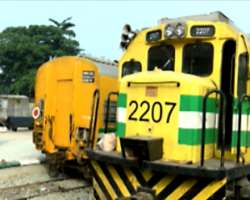 The Nigerian government on Tuesday inaugurated Enugu- Port Harcourt-Enugu intercity train service, with a promise to also construct a coastal railway line from Lagos to oil producing states in the Niger delta region.

At the inauguration ceremony in Port Harcourt, President Goodluck Jonathan, represented by the Vice President, Namadi Sambo, said his administration had been able to manage the Nigerian economy such that it had risen to be the greatest economy in Africa and one of the largest in the world.

He said that his government had changed the course of history with the railway system in the last few years, moving it from a neglected sector to a rehabilitated and revitalised one by rehabilitating the existing narrow gauge railway lines, their operations and maintenance.

The President further said the administration would construct coastal railway line that would link up commercial cities in the south-east region.

'We have introduced programmes that have impacted positively on the lives of the people and addressed key issues in our national agenda,' he said, stressing that he had fulfilled his electioneering campaign promises made to Nigerians before the 2011 presidential election.

The Minister of Transport, Idris Umar, said the construction of Lagos-Ibadan railway line would commerce soon.

He said more than 90 per cent of the existing narrow gauge rail lines in Nigeria were under rehabilitation and noted that the rail ways were very significant to the country's economy.

The Managing Director of Nigerian Railway Corporation, Mr Adeseyi Sijuwade, said that the rehabilitation of Enugu-Port Harcourt railway had many challenges, but expressed delight that it had been completed.