ADAMAWA 2015: A GROUP INSIST ON THE CHOICE OF NUHU RIBADU AS THE MOST CREDIBLE CANDIDATE 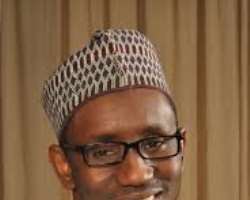 A sudden turned of general acceptability of the controversial coming of the former EFFC boss, Nuhu Ribadu as the gubernatorial flag bearer of PDP in Adamawa state who initially had generated high tension in the PDP family of Adamawa state which caused a serious faction in the PDP chapter of the state is now enjoying a welcome hand from the who and who in the state with many support from various group,people beginning to show their support and willing to campaign for him

A non-government organization,NGO known as Ribadu awareness network (RAN) that comprises of all and sundry in the state with active coordinators cut across the 21 LGA of Adamawa state boosted the Gubernatorial ambition of the former Chairman of

Economic and Financial Crimes Commission and candidate of the People's Democratic Party (PDP) Mallam Nuhu Ribadu has gotten a boost yesterday as RAN declared the candidature of Ribadu as a blessing in the entire people of Adamawa state having seen his track record of a high spirited person with proven integrity of transparency.

salvage the state from the shackles of underdevelopment as Ribadu is

the only candidate who has the experience, courage and the will to

entrench solid developmental strides in the state.
“We believe that all the other political candidates are good but Nuhu

Ribadu is the best. That is why we appeal to other gubernatorial

candidates of various political parties who are by now convinced on

the credibility of Ribadu to courageously declare their support for

him.
“The decision to support Nuhu Ribadu is borne out of our desire for

transformation and restructuring of our dear state. We believe that

with his wealth of experience both nationally and internationally, he

state,” Minakaro said.
He noted that in view of dearth of developmental strides that has

dogged the state for a very long time; the choice of Ribadu remains

resulting from many years of neglect.
“The Nuhu Ribadu we know and we want you to know is the only person

records of transparency dedication and selfless services to the nation

are witnesses to this fact,”
Minakaro urged all citizens to rally their support for Ribadu as a

with Ribadu as the helmsman in tow, the state will surely move to the