My Fans Should Expect The Best From Me—Jodie 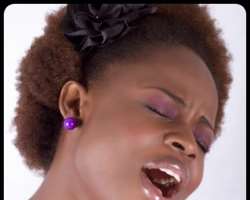 Joy Odiete, popularly known as Jodie, is a young soulful singer with a personality that exudes African freshness and originality.

With a hit song 'Kuchi Kuchi' that rocked the Nigerian airwaves some years back, Jodie has been a bit silent in the limelight, but has been performing at some shows.

In a brief chat with Nollywoodgists.com, when asked about her silence and when to expect another hit song from her, the singer said to her, music is for life and since there is life, her fans should expect the best from her.

“Music is for life, but life still goes on,” she told Nollywoodgists.com.

After studying Mass Communications at the University of Lagos, Jodie participated in the Nigerian Idols, where she emerged fifth. Despite that, the singer went ahead to build her career.

Aside being a singer and songwriter, Jodie is also into jewellery business, which she does when she is not in the studio.