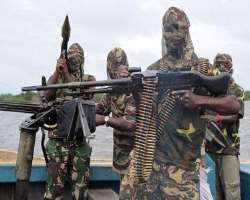 A look at the socio-political and economic environment in Imo State today reveals a horrifying picture. There is massive corruption, staggering poverty, unemployment, poor state of education due to lack of funds for schools, deteriorating infrastructures and general degree of hopelessness among the youths who feel very disappointed and let down by Governor Rochas Okorocha. Dr Herbert Nwankwo once said that in Nigeria's North there is BOKO HARAM but in Imo State there is BIKO HARAM ( those who kidnap people and powers) and use it to terrorize others.

There is no system in place in Imo state to absorb new graduates into the workforce as new graduates are left on their own to fend for themselves. Okorocha is busy promising Imolites scam jobs when he sacked 10,000 Imo graduates. If we don't say all these things who will say it for us. I was moved to tears in 2010 as I listened to a forty something year old IMSU graduate giving a testimony at church for landing his first job , the Ohakim jobs.

He was so happy and thankful to God for giving him his first job. Obviously I was happy for him too because he counts himself so lucky to have a job while many of his colleagues were still searching. But at 40? In many places, at 40 you are already a senior manager not starting your first job. You can imagine the joy in Imo State for 10,000 jobs created by this man Ikedi Ohakim. In 2011 this same IMSU graduate who gave a thanksgiving in the Church for his Civil Service job in 2010 was sacked by Governor Okorocha for no reason. The 10,000 graduates were all sacked by Rochas. The 10,000 sacked graduates are still shouting BIKO HARAM till today.

The dilemma facing us since 2011 is that more than 1,000 Imo people join the job market every year and many of them are well educated and naturally have higher expectations. Lack of jobs in Imo after the first degree forced some people back to school hoping that if they get a Masters degree things would be better but they come out to meet even a tougher job market. Chai!! Okorocha!!!. Why??? Once you start talking against Okorocha and his anti poor policies he will come after you. Citizen Samuelson Iwuoha spoke against them and they framed him up and are holding him in power gulag where he is shouting BIKO HARAM to no avail.

How can we take care of our youth as a state government if we don't care whether they are getting the right experience at the right time? The fear of the unknown has kept many Imo graduates from foreign universities staying abroad. They are scared they may not get a job if they come home. The jobless rate rose as the apostle of "rescue Imo " and “rescue Nigeria” failed to create jobs for new graduates entering the job market but helped himself and his family members to develop "pot bellies" with Imo money. They have killed local government system in Imo State and have looted our council funds and our councils are shouting BIKO HARAM .

Rochas came into power in 2011 with legs that did the running, hands that did the holding, and heads that did the thinking. But he turned dictator and started oppressing the people. Now he has no legs, no hands. No head. Those around him are still making him believe he is invincible. He got elected in 2011 and power got into his head like ring worm. He ignored what it took and how it was before he was pushed through the barrier to power. He ignored all promises about rescue and began vandalizing Imo monies and started building nonsense structures the state cannot sustain going forward. He is like a beggar who bought a car with the only money he was dashed but has no plan to fuel the car going into the future. Rochas is not a humane politician, but a dictator whose only interest is holding high offices. He is even holding APC in Imo to ransom. He gave his son in law the Imo APC governorship ticket to hold for him and ran to contest the APC Presidential primaries and after he failed woefully he came back shamelessly to grab the Governor ticket, a kind of family business. APC in Imo state is shouting BIKO HARAM.

Okorocha does not see governing as part of the governors job. To govern you must create systematic systems that can assure people of how to get things done and get things they want. His whole work is about awarding contracts to his private companies and sharing money to his cronies who collect contract money and run to their foreign countries. Past Imo Governors shared with Nigerians, but Rochas is sharing with Irish, Arabs, Chinese, and Lebanese fake contractors.

In this government, Rochas is the contractor, the accountant, the work foreman, the supervisor, the legislature, the secretary, and any and all there is. Imo has collapsed under such plan because no one has learned to do anything under him. He is LGA chairman and the head of community chiefs. He is the farmer, the farm, and the tractor. All because he does not want another Imo person that is not from his family to enjoy the oil money he collects or get seen to be doing good work. He wants everything and all credits to himself. He claimed to have tarred fake roads, built stadium,cleaned gutter built hotel, arrested armed robbers, and kidnappers, only him is working in Imo. Imo state oil producing areas are shouting BIKO HARAM as Okorocha continues to loot ISOPADEC funds.

He has deprived Imolites democracy at the councils but yet he wants Imolites to democratically elect him again. He has refused us jobs yet we have millions of unemployed graduates with degrees and knowledge he cannot present. Let us all unite, work hard and SAVE IMO State from BIKO HARAM. Like my fellow writer Onwuasonya FCC Jones use to say ' IMO GA DI MMA OZO".

Kenneth Uwadi is from Mmahu-Egbema, Imo State, Nigeria. He is the Coordinator of Youths Against Human Rights Violation And Corrupt Practices (YAHVCP)