All workers' salary arrears to be paid before Christmas – FG 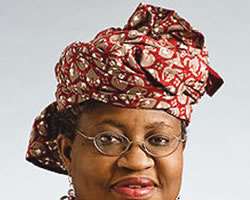 Nigerian Federal Government has  assured all civil servants owed three months salary arrears by some Ministries, Departments and Agencies that they will be paid before Christmas.

The Minister of Finance, Dr Ngozi Okonjo-Iweala, who gave the assurance in a statement issued on Monday by her Special Adviser on Communication, Mr Paul Nwabuikwu, said already, the processing of their salaries had begun since last Friday.

'The processing of the December salaries started on Friday and is continuing today.

'Civil servants should therefore get the salaries in their accounts shortly.

'Also being processed are the salaries of the staff of 14 MDAs where there has been a misuse of the salary budgets to pay promotion arrears and other allowances.

'In reaction to the wrong action, the IPPIS system, which is programmed to reject irregular procedures, had locked the MDAs in question out of the system. This led to the unfortunate delays.

'We have taken action to rectify the problem and the salary arrears of the staff of the affected MDAs will be paid along with those of their colleagues in other agencies,” the statement said.