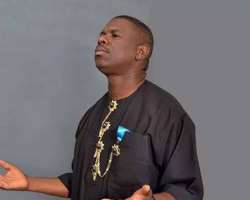 Governorship candidate of the All Progressives Congress, APC, in Rivers State, Dr. Dakuku Adol Peterside, is set to dedicate his mandate to God at an interdenominational Church Service. The church service, to be conducted by about 2,000 clergy men, will hold at the Obi Wali International Conference Centre, along G U Ake Road, Port Harcourt.

In a statement on Saturday signed by Mrs. Ibim Semenitari, Chairman, Media & Publicity Committee, APC Governorship Campaign Organisation, the interdenominational church service, which is scheduled to commence at 12 noon, will have Governor Chibuike Amaechi as Special Guest of Honour.

Also expected to grace the event are the state leadership of the APC, members of the Rivers State Executive Council, Federal and State lawmakers, Local Government Areas chairmen, members of the business community and diplomatic corps, professionals, churches, thousands of APC faithful and the general public.
The statement further said that the event is open to the public and therefore, invited the general public to be present.