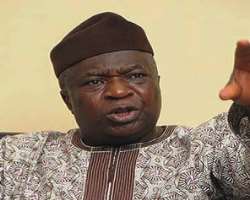 The 19 All Progressives Congress members of the Ekiti State House of Assembly on Friday formed a parallel assembly at a secret location and suspended factional Speaker Dele Olugbemi and the six lawmakers loyal to him.

The APC lawmakers accused the seven Peoples Democratic Party lawmakers of violating Section 96 (1) of the 1999 Constitution.

Olugbemi and the six lawmakers had purportedly 'impeached' the state House of Assembly Speaker, Dr. Adewale Omirin, and his deputy, Taiwo Orisalade, on November 20, 2014.

At the plenary held at a secret location in Ado-Ekiti and presided over by Omirin, the APC lawmakers also nullified all legislative actions purportedly carried out by the Olugbemi-led Assembly.

The actions include the receipt and consideration of the 2015 budget; the dissolution and reconstitution of the caretaker committee members for the 16 local government areas and the confirmation of three commissioner-nominees and special advisers.

The plenary concluded that the purported impeachment of Omirin and the 'election' of Olugbemi as House Speaker portrayed the Assembly in bad light, hence the need to suspend the seven lawmakers to save the integrity of the legislative chamber.

The Majority Leader, Churchill Adedipe, who moved the motion, claimed that the PDP lawmakers had consistently violated Section 96(1) of 1999 Constitution and House Standing Order in the last one month.

He alleged that the seven lawmakers gave false information to the public by accusing the 19 APC legislators of receiving bribes to impeach Governor Ayodele Fayose.

Olugbemi, however, was hostile to journalists when they sought his reaction to the issue.

The motion to suspend the seven PDP lawmakers was seconded by Mrs. Omowumi Ogunlola.

The 19 APC lawmakers at their plenary voted in favour of autonomy for local government and the House of Assembly and also granted approval to Section 8 of the Constitution which confers citizenship rights and privileges on Nigerians anywhere they are living in the country.

They also approved autonomy for the offices of Accountant-General and Auditor General of the state as part of constitution amendment.

Adedipe also moved the motion to reconvene the plenary at a public location outside the House of Assembly chambers for security reasons.

He said the action was supported by Section 101 of the 1999 Constitution (as amended).

The plenary resolved to hold its sittings and conduct its legislative business at the Faculty of Science, Ekiti State University, Ado-Ekiti.

Adedipe moved a motion referring the seven lawmakers to the Ethics and Privileges Committee for further disciplinary actions. The motion was seconded by Mrs. Bunmi Oriniowo (Ido/Osi 1).

The lawmakers, however, passed a vote of confidence in Omirin and the leadership of the House.

Meanwhile, a lawyer, Mr. Jiti Ogunye, described the crisis rocking the Ekiti State House of Assembly as inimical to the growth of Nigeria's democracy.

The near collapse of governance in the state, according to him, is a deliberate attempt by the executive to foist its selfish desires on the people and political system.

Ogunye said, 'What we are witnessing in Ekiti State is worse than shame. Not even in an African movie would you see such illegality. It is barbaric.

'The judiciary in Ekiti State is under siege. Seven cannot be majority in a House of over 24 lawmakers. If these seven lawmakers are being given protection by the police and hoodlums and those in the majority cannot perform their legislative functions, that is illegality. For me, Omirin remains the Speaker of the Ekiti State House of Assembly. Olugbemi is just a usurper.

'Omirin and his colleagues are the majority and have the right to go elsewhere to sit if they cannot gain access into the Assembly.

'The constitution did not state a specific venue where the House can carry out its legislative function apart from the fact that it must be in the state capital which is the administrative headquarters.'

But another lawyer and rights activist, Mr. Festus Keyamo, described the sitting by the 19 lawmakers outside the legislative chamber as illegal. He also said the sitting of the other seven PDP lawmakers was wrong.

He called on the National Assembly to immediately take over the legislative functions of the Ekiti State House of Assembly as the state does not have a functioning assembly at the moment.

'The remedy for the 19 lawmakers was to go to court to get an injunction against the other side and go back to sit in the house.

'Therefore, there is no legal sitting in Ekiti State House of Assembly now as there is no functioning assembly. So, the National Assembly should take over the functions of the assembly immediately.'

The tribunal had relocated to Abuja after hoodlums disrupted the proceedings in Ado-Ekiti in September.

Justice Suraju Mohammed-led tribunal dismissed the petition filed by the All Progressives Congress challenging the declaration of Fayose of the Peoples Democratic Party as the winner in the election.

The Independent National Electoral Commission had declared Fayose the winner of the election defeating the APC and its candidate, Dr. Kayode Fayemi.

The tribunal held on Friday that APC's petition lacked in merit as the party failed to prove any of its claims.

The party had through its petition asked the tribunal to void the election which it alleged was marred by irregularities.

The party had also contended that Fayose was not qualified to have stood for the election on the grounds that he was impeached from the same office in 2006 and that his Higher National Diploma Certificate was forged.

The APC had therefore asked the tribunal to nullify the election on the grounds of the alleged irregularities characterising the poll or in the alternative return its candidate, Dr. Kayode Fayemi, who polled the second highest votes, as the winner.

The respondents to the petition were the PDP, Fayose, INEC, the Chief of Army Staff and the Inspector-General of Police.

In its judgement, the three-man panel led by Justice Suraj Mohammed held that the petitioner failed to prove the alleged irregularities characterising the poll.

It noted that the petitioner contradicted itself when it sought an order nullifying the election and in another breath sought that the certificate of return be given to its candidate.

Fayose hails verdict
Fayose, on Friday hailed the governorship election petition tribunal's verdict which dismissed the petition of the APC challenging his victory in the June 21, 2014 election.

He said the verdict had demonstrated that the Ekiti people freely gave him their mandate.

Fayose, according to a statement by his Chief Press Secretary, Mr. Idowu Adelusi, said the election was the freest in the political history of the country.

The statement read, 'We have said ab initio that going to court by the APC was trying God and that it is the character of a bad loser whose stock in trade is fabricating lies purposely to deceive the gullible minds. Ekiti people who came out to vote for Fayose are not fools.'

APC vows to appeal judgement
In a statement by its state Publicity Secretary, Mr. Taiwo Olatubosun, the APC said it was dissatisfied with the verdict which dismissed the petition based on the fact that the grounds of the petition were pre-election matters.

'Even though the tribunal did not say that all the issues raised against Fayose were not true, dismissing the entire case on the basis of pre-election matter tag will be challenged at the Appeal Court.' Punch