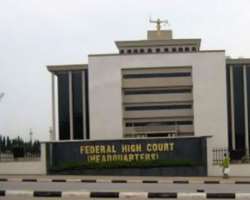 A Federal High Court in Abuja has set aside the summons of the House of Representatives on the Minister of Petroleum Resources, Mrs. Diezani Alison-Madueke, over a proposed probe of her alleged waste of public funds of chartered jet for unofficial purposes. Justice Ahmed Mohammed on Wednesday voided the summons in a judgment in the suit filed by the minister, her ministry and the Nigerian National Petroleum Corporation to challenge the validity of the House's invitation. The minster allegedly spent about N10bn of public fund on charter and maintenance of an 850 Challenger jet for unofficial purposes. This informed why the House Committee on Public Accounts had through letters dated March 26, 2014, summoned her and the Nigerian National Petroleum Corporation to appear before it for the purposes of investigating the allegations. The judge in his judgment held that that the summons was invalid as there was no evidence before the court to show that the House resolution from which the summons emanated was published in the journal of the Natâ€Žational Assembly or the official gazette of the Federal Government of Nigeria. â€ŽHe held that though the National Assembly had the power to invite any public officer for the purpose of investigating their activities, failure to publish the resolution as required under Section 88 of the Constitution had rendered the summons invalid. …more details later.