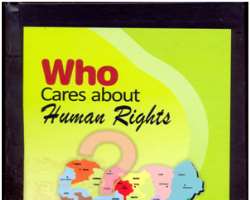 Nigeria, at independence, held a lot of promise. The world was watching and Nigerians themselves were expectant, believing that in no time, their country would be a super power and a gleaming example for other African countries to emulate. This was however not to be; so bad that by 2013, it was named the worst country to be born in by the Economist Intelligence Unit – made worse by the fact that the country has continued to feature prominently on corruption lists, irrespective of their source.

Although a lot of reasons have been advanced for this state of affairs in the most populous black nation in the world, Emmanuel Onwubiko, in his book, “Who Cares About Human Rights?” blames it almost entirely on the government's flagrant disregard for constitutional provisions which ordinarily should protect the rights of Nigerians.

The book – a compilation of articles on the author's perspective on various national and international issues that were published in various local newspapers and online platforms in the last nine years – brings to the fore, many ways through which the government abuses the rights of the people. Interestingly, many of the victims, that is, the Nigerian people, do not even know that their rights are being or have been abused.

In this 1024-page book, which is divided into 143 chapters, Onwubiko, a human rights activist, analyses various socio-political, economic, and religious issues that have affected Nigeria's polity since independence, particularly since 2005. With catchy titles, these issues range from the reasons for subsidy removal as told by those who advocated for it; how as a result of poverty, many young girls have now taken to the streets as prostitutes, encouraged or even forced by their parents, corruption in the judiciary, the Nigerian Police Force, religious extremism the Biafra War, and many others.

In Chapter One, for instance, he talks about the fuel subsidy removal of January 1, 2011, which resulted in a protest that almost crippled the country. He believes it was completely insensitive and unnecessary for the government to have done so as it was one of the very few ways through which the masses benefit from the government. He suggests that the government, in trying to save money, could increase its tax on the upper class which is the practice in most developed countries anyway.

On the international scale, he extensively quotes various international laws, declarations and conventions all through the book. He also discusses pertinent issues like the war in Sudan and Liberia's new status as a country recovering from years of civil war. In different chapters he talks about such personalities as President Robert Mugabe of Zimbabwe, Kofi Annan, erstwhile secretary-general of the United Nations, President Ellen Johnson-Sirleaf of Liberia and her predecessor, Charles Taylor. Taylor is currently serving a 50 year jail term for fuelling the civil war in Liberia and Sierra Leone and other war crimes.

In Chapter 16, he compares and contrasts the personality of America's First Lady, Michelle Obama, and that of her Nigerian counterpart, Patience Jonathan, concluding that while Mrs. Obama exudes sophistication and the perfect helpmate to her husband and mother to the nation, Mrs. Jonathan has a lot to learn.

One cannot help but wonder what has become of the pathetic Pfizer Trovan Antibiotic case of 1996 in Kano as discussed in Chapter 20 of the book, titled Pfizer Victims and the Monkey Story. Through this chapter, he is able to show how inept the government is and has always been in protecting the lives of its vulnerable citizens, even against exploitative foreign companies. Between 5 and 11 children died from the unauthorized trial of a drug while others suffered various degrees of disabilities. How over $4.5million was used to purchase cars and a well furnished office for the board and its members that were to monitor the compensation of the victims is beyond imagination. This, to the author, is made worse by the fact that, to this day, not a single victim or their relative has received a dime in compensation.

Situations like this have become the order of the day in Nigeria where boards and committees are set up and equipped to the teeth but after several years the problem they were set up to solve remains untouched.
In Chapter 106, titled Pfizer: Never Again, he blames Nigerians for doing very little to help themselves by continuing to patronize drug hawkers, despite repeated warnings from the National Drug Law Enforcement Agency (NAFDAC).
Throughout the book, he not only mentions the problem and analyzes them with the critical mind of a journalist and activist but goes a step further to proffer solutions.

However, some articles, due to no fault in them at the time they were written, have not aged well, with hindsight correcting suppositions and expressions. Perhaps, articles such as these may have benefited from being updated to include new facts and contexts that have emerged.

His passion and concern for the country and the issues he writes about are palpable, demanding the immediate attention of those in a position to make change happen and this is by no means limited to the government. He also sounds a rallying cry to all his readers who feel similarly involved to be moved to action.

Of course, like any enterprise of sincerely passionate origins, he sometimes goes overboard in his criticism and positions like when in Chapter 133 he said the president, Goodluck Jonathan, has “cleverly adopted” two Igbo names with reference to his middle name Ebele and Azikiwe, as if he only got the names to appeal to the Igbo people over the government's repeated failure to rebuild the Niger Bridge whereas they have been a part of him long before he became president. He had also described former governor Murtala Nyako's argument that accuses the president of genocide with the military intervention against Boko Haram in Adamawa State and the rest of the North East as “puerile”.

Although there must have been a better way to say Nyako's argument and attempt to incite other northern governors against the president was aimed at sabotaging the fight against terrorism without attacking, one can easily understand that it is his desire for a better nation that also imbues the book with its strong points.

Indeed, Who Cares About Human Rights? By former Federal Commissioner of the National Human Rights Commission and a member of the Presidential committee on Continuous Dialogue in Northern Nigeria [PCCDR], Emmanuel Onwubiko is a book everyone who wants to get an authoritative perspective and good history of Nigeria must read.

It is a well-written, passionate dissection of hot topics over the last decade filled with many insights and factual revelation which is a must-read for everyone interested in an authoritative perspective and good history of Nigeria and contemporary Nigerian politics.

+ Miss IGBINEDION THE BOOK REVIEWER WORKS WITH THE EDITORIAL DESK OF Government, an arm of the LEADERSHIP NEWSPAPERS IN ABUJA.