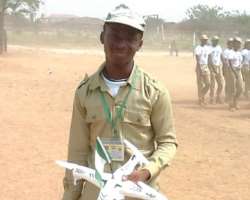 Osun State Deputy Governor, Mrs. Titi Laoye-Tomori, among other dignitaries, watched in admiration how a drone built by a corps member posted to Osun State took off and carried out surveillance of the parade ground at the Permanent Orientation Camp of the National Youth Service Corps on Monday.

The corps member, Olaolu Ayoola, a graduate of Computer Science/Engineering of the Ladoke Akintola University of Technology, Ogbomoso, stole the show with his project during the closing ceremony of the orientation course for the 2014 batch 'C' of corps members deployed in the state.

The drone, which soldiers and other security agents present at the event described as a good one, flew for about 10 minutes before it landed.

The device, fixed with a surveillance camera, can stay in the air for 20 minutes and is capable of climbing up to 500 metres.

The device with remote control and 2.4G radio transmitter carried out live recording of the event, which he monitored on his black berry phone.

Ayoola told our correspondent in an interview that his love for aeronautics drove him into building the device.

According to him, apart from military use, the drone is also useful in hoisting flags as well as monitoring ongoing activities in large farms.

He said, 'This type of drone, if fully developed, can be used by farmers. You can deploy it to fly round a farm of about 20 hectares and you will monitor what is going on.

'It can also be used to monitor traffic situation and flooded areas. I spent over N20,000 to build it, but I can do something with a bigger capacity and which will stay for hours on air if fund is available.'

The deputy governor, who said she was impressed with the initiative, urged other youths to emulate Ayoola.

She said, 'I am very impressed with what you have done. It is a good thing and other youths should emulate you.

'Anywhere you are posted to, I want you to assemble a group of youths who you can teach how to invent something like this. This is a wonderful skill and I am impressed with this.'