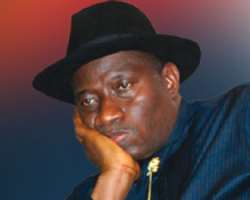 A Federal High Court in Abuja has fixed January 15 for further hearing in a suit filed by two lawyers and another Nigerian - Mase Acho, Saeeq Sarki and Murtala Abubakar - who are also challenging the eligibility of President Jonathan and his vice, Namadi Sambo, to seek re-election.

The plaintiffs in both suits are in their substantive suit asking the court for, among other prayers, an order restraining the INEC and the AGF from allowing Jonathan and his vice, Alhaji Namadi Sambo, to seek re-election for their respective offices in 2015.

They argued that by virtue of constitutional provisions, the oaths taken by Jonathan and Sambo following the death of President Umaru Yar'adua in 2010 and their subsequent re-election in 2011, both of them were deemed to have completed the two terms allowed by law.

The parties in the second suit, numbered, FHC/ABJ/CS/661/14, are President Jonathan, Sambo, the Peoples Democratic Party and INEC.

The judge adjourned the matter to enable him to attention to about 17 other cases listed for the day.

The court had heard the plaintiffs' counsel, James Ocholi (SAN), as well as the preliminary objection and the counter-affidavit filed by Nomeh in opposition to the suit on behalf of Jonathan and Sambo.

The PDP's counsel, Mr. Victor Kwon, was arguing his own preliminary objection and counter-affidavit when the judge asked him to stop and return to elaborate on his submissions on January 15.

Meanwhile, the same court has fixed January 12, 2015, for ruling on an application for the transfer of a suit challenging the eligibility of President Goodluck Jonathan to seek re-election in 2015 to the Court of Appeal.

The plaintiffs, who both claim to be presidential aspirants - Adejumo Ajagbe and Olatoye Wahab - are seeking the referral on the grounds that the suit involves 'a substantial question of law' which the Court of Appeal has to make pronouncement on 'as soon as possible.'

At the hearing of the application before Justice Ahmed Mohammed on Monday, the Attorney-General of the Federation, Mr. Mohammed Adoke, who is one of the two defendants in the suit, numbered FHC/ABJ/CS/662/14, opposed the application.

Through his counsel, Mr. Kenechukwu Nomeh, from the law firm of Mr. Ade Okeaya-Inneh (SAN), the AGF argued that the plaintiffs' application for referral was a ploy to delay the hearing and the disposal of the main suit.

The attorney-general also argued that his counsel, Okeaya-Inneh was representing the President in an appeal on the same subject matter of Jonathan's eligibility at the Abuja Division of the Court of Appeal, 'hence there is no need for the referral.'

The appeal referred to by the AGF was filed by Mr. Cyriacus Njoku who is challenging the judgment of Justice Mudashiru Oniyangi of the Federal Capital High Court, who had earlier ruled that Jonathan was eligible to contest in 2015.

Nomeh on Monday urged the Justice Mohammed to be persuaded by the FCT High Court judgment and a similar one earlier delivered by the Kaduna Division of the Federal High Court.

But counsel for the plaintiffs, Mr. M.A Magaji (SAN), justified his client's application on Monday, insisting that none of the respondents' interests would be jeopardised if the matter is referred to the Court of Appeal.

Magaji maintained that in view of an earlier decision of the Supreme Court, a judge of the lower court was under obligation to refer a case to a higher court upon an application for it by a party.

The judge adjourned till January 12 for ruling.