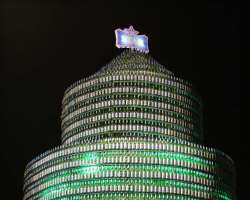 The record-breaking tree is made with a total of 8,000 star bottles as against 3,000 bottles announced during the commencement of the project. This development was as a result of the excitement the project elicited in the minds of consumers and Lagosians who trooped in to submit empty bottles as contribution towards the project.

With over 17.5 million people, Lagos is the most populous city in Nigeria and the seventh fastest-growing city in the world. It is also the commercial capital of Nigeria, making it an increasingly attractive hub on the continent.

The bottle tree is a first of its kind in the country, symbolizing greatness and the enterprising Nigerian spirit personified by Star Lager, the country's leading beer brand.

The Star Tree aims to break the current World Record of 1,000 beer bottles being held by the Chinese city of Shanghai.