Obasanjo: The Man, The Book and The Law 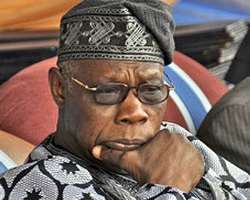 In the Nigerian political landscape, there is an individual that some believe to be larger than life. Whether he is a septuagenarian or octogenarian, is a subject for debate amongst many people. Nonetheless, he still maintains the record of being the only person to have been both a military Head of State and a democratic President. The jury is still out as to whether or not he should be considered a statesman. This may be because of his penchant for making statements when a true statesman may have chosen to remain silent or restricted his statement to a closed-door meeting.

I am of course referring to Chief Gen. Olusegun Obasanjo (rtd.), the one-time Board of Trustee member of the Peoples Democratic Party. Some of his antics have made some pundits to wonder if he was a closet opposition party member.

Don't forget that OBJ had stated that he was staying away from active politics but also recently met with members of the opposition party, All Progressives Congress (APC). The delegation included recently defected Speaker of the House of representatives and APC Sokoto State Governorship candidate, Hon. Aminu Waziri Tambuwal. Tambuwal is the one that joined Obasanjo in 2013 to throw two salvos on the President - one concerning the executive shielding of oil thieves and a second about the State of corruption in the country. Please see my article titled OBASANJO & TAMBUWAL'S SALVOS ON JONATHAN. In that article, I commented on OBJ's politically motivated wherein he warned the President to act “before it is too late.” Obasanjo in that 18-page letter stated that “Allegation of keeping over 1000 people on political watch list rather than criminal or security watch list and training snipers and other armed personnel secretly and clandestinely acquiring weapons to match for political purposes like Abacha and training them where Abacha trained his own killers, if it is true, it cannot augur well for the initiator, the government and the people of Nigeria.”

We have always wondered whether OBJ is working against the president. In a piece titled OBASANJO vs. JONATHAN, I raised this issue and wondered if GEJ and OBJ were on a collision course. It should be recalled that GEJ provoked OBJ by stating at a press briefing on Sunday, November 25, 2012 that the method employed by OBJ in handling the infamous 1999 Odi problem was not effective.

OBJ who is famous for laughing, especially at his former VP, Atiku Abubakar, chose to ignore a court order and publish his book called “My Watch.” As expected, the book made scatting allegations against President Goodluck Jonathan and the members of National Assembly. The aim in this analysis is not to comment on the veracity of the contents of the book, but to ask why the book was released in contravention of a subsisting court order and why the book had to be launched at this heightened political period. Was it a marketing strategy or a move meant to aid the opposition?

The contents of the book are not that different from OBJ's statements almost in 2012 that “today rogues and armed robbers are in the States Houses of Assembly and the National Assembly.” Additionally, he quipped added that the judiciary was overwrought with corruption. I guess he should know because some of these people were put in their positions during his “watch.”

Now that a Court has issued an interlocutory contempt order that OBJ must answer within 21 days, I wonder if Baba is still laughing.

*Rev. Akpodiete, a public affairs analyst and media consultant writes from Asaba. Contact him on 08138391661 or [email protected],