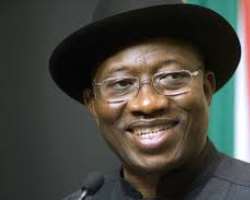 President Goodluck Jonathan is ready for public debate with any aspirant that emerges as the presidential candidate of the All Progressives Congress.

The National Publicity Secretary of the Peoples Democratic Party (PDP), Chief Olisa Metuh, stated this at a press conference at the party's Abuja national secretariat on Tuesday.

He said the debate will focus on a wide range of issues affecting the country, adding that the President would be ready for the APC candidate after the ratification of his candidacy on Thursday.

The party spokesman said 3,073 delegates are expected to participate in the PDP convention where the President's sole candidacy is expected to be sealed.

Metuh said: 'As a party, we are going into the conduct of our presidential primaries, in particular, with great excitement, knowing very well that we are keeping an appointment with the destiny of our nation as embodied by Dr. Goodluck Jonathan who is both President of our nation and candidate of our party on the occasion of our presidential primaries at the Eagle Square.

'The PDP is rest assured that we have a very good product to sell to Nigerians. We are confident that President Jonathan, as our candidate, is primed to win the 2015 presidential election based on his popularity deriving from his forthrightness, humility and steadfastness to the Nigerian project, coupled with his record of verifiable achievements.

'We are today serving notice to the opposition APC to expect a crushing defeat at the polls. In view of our confidence, preparedness and the popularity of our candidate, we declare that the APC can put forth its two frontline aspirants in one bunch, namely Gen. Muhammadu Buhari and Alhaji Atiku Abubakar as joint presidential candidates with their collective credentials and followership to face our candidate, President Goodluck Jonathan.

'The President has been able to stabilize the polity by his pan Nigerian outlook and approach to governance. The stability of our nation has strengthened national unity. Today, he has been able to give every geo- political zone a sense of belonging in terms of infrastructure development, economic and human capital empowerment.'

The party said no other leader had united the Nigerian people more than Jonathan had done, adding that the President has continued to act on the side of caution in the counter insurgency campaign.

'President Jonathan has stabilise the economy. The rebasing of the economy has made Nigeria the largest economy in Africa and 26th in the world.

'For us in the PDP, it is neither a matter of conjecture nor propaganda; we are certain that with the grassroots support and the love he enjoys from Nigerians across board, President Jonathan will secure an emphatic victory at the polls.' - National Mirror.