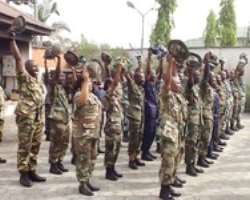 The military announced, yesterday, it is now in full control of Mubi, Gombi, Maiha and Hong local government areas of Adamawa State earlier captured by the Boko Haram insurgents mid last month. The announcement came on a day President Goodluck Jonathan commended the nation's armed forces for their courage and sacrifices in the war against insurgency in parts of the country even as he assured that the Federal Government was working hard to improve security in the North-East ahead next year's elections. On the recaptured council areas on Adamawa, an army officer (who did not want his name in print) who conducted newsmen round the council areas weekend said the troops in collaboration with other security agencies chased out the insurgents The officer said the tour with the journalists was necessary to debunk insinuation that the insurgents were still in the areas and more importantly to assure residents of the affected areas that their places were safe, well protected and fortified for them to return to their homes. Residents express relief Vanguard observed that life was gradually returning to normal in the local government areas as people were returning home. But, most of the roads and streets in these areas were still deserted as pockets of people gathered in front of their homes apparently scared of the advancing military vehicles thinking they belonged to the insurgents. In Mubi town, which is the commercial nerve centre and second largest town in the state that was renamed 'Madinatul Islam' by the insurgents moments after it was captured, businesses had resumed in the markets. Apart from the markets, the town itself was like a ghost city as government and private business places remained under lock and key even as all the commercial banks in the town were either burnt down or destroyed by the insurgents with Improvised Explosive Devices, IEDs. Some of the residents of Mubi, who spoke to Vanguard described what they went through as a story that cannot be recounted. Malam Isah Ali said: 'I thank God for keeping me alive to tell this story, though we lost all our property to the Boko Haram insurgents. My shop and house were locked, we had to move to the mountains in the border with Cameroon to hide for weeks. 'The Nigerian Army tried by recapturing this town as I never thought of coming back soon.' FG working hard to improve security in N-East— Jonathan Meanwhile, President Jonathan has said that the armed forces and security agencies will sustain and intensify ongoing operations against insurgents in the country's north-eastern states to achieve significantly improved security there ahead of the 2015 general elections. Speaking at an audience with the Israeli Ambassador to Nigeria, Mr. Uriel Palti, Jonathan said Nigeria will continue to work with neighbouring countries for the effective implementation of the regional security arrangements which were recently concluded to enhance multilateral cooperation against extremism, terrorism, insurgency and other cross-border crimes. The President told the Israeli Ambassador that the Federal Government was actively and progressively enhancing the ability of Armed Forces and security agencies to deal decisively with terrorists and insurgents. Jonathan lauds Armed Forces The President also paid glowing tributes to men and women of the nation's Armed Forces for their courage and sacrifices in the war against insurgency in parts of the country. He spoke while launching the emblem and appeal fund for the 2015 Armed Forces Remembrance Day celebration at the Banquet Hall of the Presidential Villa, Abuja. Jonathan restated the Federal Government's commitment to the welfare of military veterans and families of the nation's fallen heroes. He said: 'We salute and appreciate the courage and sacrifices of men and women of our armed forces in grappling with the wave of terrorism in some parts of our dear country. 'They have displayed unalloyed loyalty and commitment to Nigeria. In their demanding task to keep Nigeria one and united, some of our gallant officers and men have lost their lives. 'To these officers and men we pay tribute and pray fervently for the repose of their souls.' Vanguard