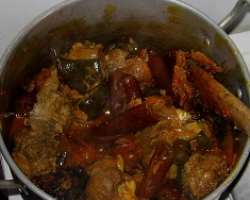 A 10 year old girl has lost one of her fingers for daring to steal meat from her madam's cooking pot.

The woman, identified as Mama Jennifer, has been arrested for brutalizing the maid, Ndozi, in her restaurant around Akuose New Layout, Ibuso/Asaba axis of Delta State.

The little girl's cry of pains attracted the neighbours, who after rushing to the place, found her in a pool of her blood and after enquiring what happened, it was realised that her madam had chopped off her finger while beating her.

The neighbours immediately rushed the girl to the hospital, while others reported the case to the police and Mama Jennifer was apprehended later in the same day.

The Delta State spokesperson, DSP Celestina Kalu, confirmed the act, saying that the suspect was currently being interrogated by the state CID, and had given them more information on what led to the incident.

“Upon interrogation, she admitted to the inhuman treatment meted out on the maid, adding that she was provoked when it was discovered that the maid stole from the pieces of meat in the Nsala soup leaving her with no option than to chop-off her finger with the knife she was holding. The victim was taken to a private hospital where she is currently receiving treatment.”

The pair have also been arrested and are presently being detained while investigation continues.