Corruption Should be checkmated by Federal Government-Chief Ogude 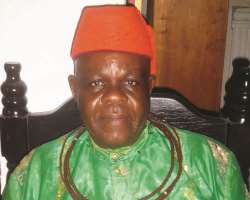 Chief Edward Efezino Ogude (JP) is one of the founding fathers of Isoko Club 2000, a retired military officer, trained in both Nigeria and Abroad, and happily blessed with a lovely wife and children, doing well in their chosen professions. He believes that only credibility in leadership can chase out corruption in Nigeria. Today, Chief Ogude holds a traditional title of Ogbemulogbo of Ozoro kingdom and one of the reputable sons of Isoko nation. He spoke extensively on the need for government to checkmate corruption in Nigeria and to restructure Isoko leadership.

Excerpts:
Can we meet you sir?
I am Chief Edward Efezino Ogude (JP), a retired military officer, trained educationally both in Nigeria and abroad. I'm from Ozoro kingdom and one of the founding fathers of Isoko Club 2000 and others.

Tell us about Isoko club 2000.
Well, Isoko club 2000 was founded to unite Isoko nation in all ramifications. It was a gathering of some Isoko people who felt we can use this medium to reach out to our people. We are not political but how to revive our culture and language in Isoko generally.

What is your stake on corruption in Nigeria?

In democracy, politicians seek and contest election into an elective office. It requires person or persons committed to rendering service that meets or addresses the needs and yearnings of the people of his constituency. It is call to serve and show leadership and governance by example, avoid greed, corruption and not an opportunity to amass wealth for self. This is normal in an ideal democracy. Unfortunately, the general impression of electorates irrespective of party affiliations, and party politics appears to be that of deceit especially at the grassroots. As a result elected representatives tend to get what they want at their whims and caprices and not what the electorates want. Politics today is therefore at cross roads. There seems to be no level playing field. It is largely a game for money bags as all aspects of it have been monetized. It costs a lot of money to run political campaign at any level. The electorates have no choice but to trade off their conscience and integrity. The attitude of politicians is that of taking the advantage of their constituencies and the electorates by doing out various items of empowerment as democracy dividends. It is usually a circus of activities publicly witnessed by party leaders, party loyalists used as foot soldiers to manipulate ill- informed and ignorant electorates in favour of the party in power. They are like Greek gift items painted with the brush of nepotism and parochialism. The benefit is for a few individuals or a group at the expense of the entire community and constituencies. Corruption with impurity is choking and suffocating in high places including democratic institutions like the executive, legislature and the judiciary.

How can we eradicate corruption In Nigeria?

This is a country where bullet proof cars for aviation ministry bought with tax payers' money at the expense of the vulnerable group in the society: children, women, youths, elderly, widows, widowers, the sick and the disabled. The National Immigration Service ill-fated recruitment exercise that caused a stampede at the National Stadium, Abuja in which the nation lost the lives of many unemployed youths in their prime and many injured. Those who adopted such uncivilised and murderous model of selection have been awarded National Honour Awards, and still parade themselves in office as members of the executive at the expense of the families of the victims who have been inflicted with emotional and psychological pains and with total disregard of public opinions on the incident. For government to checkmate corruption, it must provide basic infrastructure on ground like good roads, health, sports, secure pensions, job opportunities for the youths, electricity, skills acquisition and others.

Which way out of Nigeria growing problems?
First, primary health care facilities are deficient in human and material resources. Health care delivery is very important for the first line preventive measures against killer diseases that commonly affect children 0-5 months. Provision of ante and post natal clinics for pregnant women in order to check and reduce and maternal morbidity. It should not be taken for granted at grassroots levels. Awareness campaign should also be encouraged through advocacy by opinion leaders, religious leaders in the church and mosques, local media, radio and of course town unions and market women. We should elect credible leaders with credible manifestoes and lastly Isoko nation must be united at all levels. Every young man growing up in Nigeria must learn to be contented in life and in order to reduce crime in the country.