Ex-Minister, Chris Ogiemwonyi dumps PDP for APC with over 2000 supporters 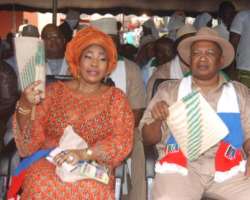 A former Minister of state for works, Engineer Chris Ogiemwonyi on friday, November 28th, 2014, formally decamped from the Peoples Democratic Party,PDP, to the All Progressive Congress, APC, with over 2,000 followers.

The one-time President of the Energy Strategy Centre, Abuja also used the opportunity to declare his intention to contest for the Edo State Gubernatorial election in 2016.

Speaking during his declaration and deflection at the Urhokpota Ground, Oba O Vonramwen Square, Benin, ‎Mr. Ogiemwonyi gave credence to Governor Oshiomhole for his massive developmental efforts in the state.

"I want to consolidate on the monumental transformation of Gov Oshiomhole which is being witnessed in Edo State".

He added: "Our governor, Adams Oshiomhole, has done well in terms of development of Edo state and only a party like APC with a candidate like me can continue the good works of Mr Governor" Mr. Ogiemwonyi said.

He charged electorates to vote out PDP across Nigeria at the 2015 election stressing that "Nigeria is at a crossroad today in all aspects because of PDP is undemocratic".

‎Welcoming Engineer Ogiemwonyi to the APC, Edo state Governor, Adam‎ Oshiomhole, said Mr. Ogiemwonyi made the right decision and called PDP a failure that has no space in Edo State.‎

"This is the party of change, and the PDP is a failed party that has no space here in Edo state. You have made the right move and you are welcome to the APC" the governor said.

The governorship aspirant thanked his over 2,000 followers who decamped with him to APC promising them of better life with the APC as the decampees are currently doing their party registration at Moropokta hall, Benin.