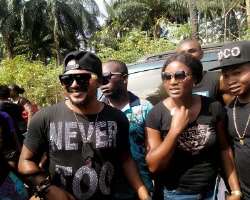 It was a season of tears, pains and anguish at the burial of Nollywood actor Clems Onyeka, who was killed by a stray bullet last month in Asaba, Delta state during a police and bank robbers fracas.

The deceased actor was buried today at his father's compound in Ikeduru, Imo state.

According to the information gathered almost all the Nollywood actors were present at the burial. As the star was been committed to mother earth, the compound witnessed so much crowd that people could not have access to his graveside.

During the burial, top Igbo comedian, Uche Ogbuagu presented the sum of N500, 000 to his Clems' widow, while his old school mate donated N250, 000 to the welfare of his family.

Clems is survived by his mother, wife and three children.© 2014Nollywoodgists.com