ORGANIZATION OF FISHERMEN, SEAFOOD DEALERS AND FARMERS IN THE NIGER DELTA ALLEGES PLANS BY SHELL TO BRANDISH OKOLOLAUNCH SPILL A SABOTAGE 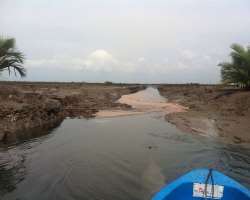 The Organization of Fishermen, Seafood Dealers and Farmers in the Niger Delta, (OFSDF-ND) has raised alarm over attempts by multinational oil giant Shell to brandish the recent massive crude oil leak at Okolo Launch in Bonny which occurred near the 24-inch and the 28-inch TNP (Trans-Niger Pipeline) as sabotage. The organization had also said it has no confidence in the Joint Investigation Committee set up by Shell to investigate the matter because the committee has already compromised before conclusion of investigations.

Publicity Secretary of the group, Barr Victor Fred-Eric Pepple made this disclosure while briefing some newsmen in Bonny. 'I have it on good authority that SPDC has set up a kangaroo joint investigation committee (JIV) to investigate the cause of last Saturday's pipeline devastating leak that started in Okololaunch Bonny. As good as that move may seem, I also have it on good authority that shell management has concluded to brandish the said spill a sabotage', he said.

SPDC he continued is desperate to hide the truth so as avoid payment of compensation to the community and fishermen affected and whose source of livelihood has been removed. He explained that the spill was caused by a swamp boogie caterpillar belonging to a Shell subcontractor handling pipeline job in the area. The heavy duty swamp buggy caterpillar according to him has hit the active pressure pipeline, perforating it in the process to leave a very huge puncture sparking up outburst of crude like never before witnessed in the area.

“We can reliably inform you that when the swan buggy perforated the pipeline, our fishermen were on ground to witness the incident. In fact it was the women fishermen around the area at the time the incident occurred that forced the contractor to stop work - they tied restraining leaves around the swan buggy before proceeding to alerting their husbands who came and had video footages of the spewing crude”.

Pepple recalled that an SPDC spokes woman in London had claimed that the lines has been shut since October 18 for repair and integrity checks, but wondered how that amount of crude was able to spew out of the pipeline. “Even in the incident of oil bunkering the amount of oil that spewed out of the damaged pipeline has never been witnessed in the area; this is an indication that the swan buggy's impact on the pipeline was shattering.

This goes to show the level of resolve by SPDC to fight dirty and avoid statutory compensations as demanded by law.

Preye Okosi Secretary of the organization said the spill is presently ravaging, Bonny, Opobo, and ogoni territorial waters. According to him the SPDC JIV report is expected to solely center on the point of the spill and is not expected to capture other huge areas and communities seriously affected by the spill; and we ask how such report can then be conclusive and justifiable.

The organization of Fishermen, Seafood Dealers and Farmers in the Niger Delta, (OFSDF-ND) is therefore urging Bonny people to raise their voices against the grand conspiracy, impunity and criminality by SPDC.

According to Okosi, “Bonny people must not treat this with kid gloves, enough of this impunity - we are using this medium to call on our well respected and revered monarch, the Amanyanabo of Grand Bonny Kingdom, King Edward Asimini William Dappa Pepple to intervene on this matter. Shell is attempting to take the entire Bonny for a ride by denying the community and its people what is due them by statutory compensation. We are also urging all well meaning sons and daughters of Bonny kingdom who have the interest of the kingdom at heart to stay away from signing the JIV report as it is anti Bonny and can never reflect the true realities on ground. Ibani ijaw sons and daughters must rise against this impunity and deliberate attempt to distort justice” he averred.

In view of the various foreseeable altercations, the OFSDF-ND is therefore advocating that a foreign third party be involved in the investigation. It dared shell to make available pictures of the spill point and the JIV report, adding that it will not hesitate to take legal and civil actions if any distortions are noticed in the process.