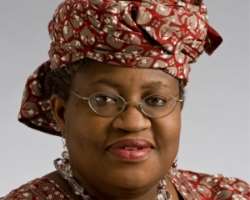 The Finance Minister, Dr. Ngozi Okonjo-Iweala, has given an assurance that the government has put strategies in place to deal with falling oil prices for as low as $60 dollars per barrel.

The Minister said the scenario-based approaches developed to cushion the unfavourable effects of the falling prices are comprehensive and supported by extensive consultations with global analysts such as the International Monetary Fund.

She said short to medium term strategies, mainly targeted at the poor and vulnerable, had been developed.

Dr Okonjo-Iweala said part of the medium term strategy was a revenue target of three billion dollars over the next three years with substantial cuts on expenditure both recurrent and capital.

She, however, said the cuts would not affect priority sectors - infrastructure, health, education and security - that would focus on the poor and average Nigerians.

While presenting a master plan for the Nigerian capital market towards global competitiveness, at an event that brought together experts and key players in the financial economic sector, held on Thursday in Abuja,  the Minister tried to ease Nigerians nerves, as the recent devaluation of the Naira had started showing multiplier effect on cost of goods.

Key issues in the economy came up for discussion and first among them was the falling oil prices and the consequences on the economy.

The minister also assured the participants that the medium term strategies to cushion the falling oil prices would prioritise sectors that directly affect the poor and vulnerable.

But for most of these strategies to work, a robust capital market that will provide long term finance for developmental projects is needed.

This is what the master plan developed by the Securities and Exchange Commission, the body regulating the capital market, is set to tackle.

The plans so far announced by the key players in the financial economy are targeted at creating wealth and opportunities for many Nigerians.

The Finance Minister emphasised that although the global environment was uncertain, Nigeria had the strategies to cushion the effects.

Crude oil sales is Nigeria's major source of revenue and the price of crude has in the last few months hovered around $80 and the drop in price has forced the government to adjust the crude oil price benchmark used in the proposed 2015 budget that has not been submitted to the National Assembly.

The development coupled with the Central Bank of Nigeria's devaluation of the Naira had triggered fears over the economic situation of the country and the days ahead.