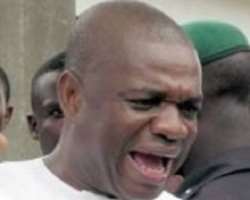 Our attention has been drawn to the malicious and false publication by THISDAY online of November 26, 2014, to the effect of Abia PDP Appeal Panel disqualifying Orji's Son wherein it asserted partly that: “The alleged scheming by Governor Theodore Orji to foist his son, Chinedu, as a member, and possibly Speaker, of Abia State House of Assembly in 2015 on the platform of the People's Democratic Party (PDP) may have hit the rocks following the disqualification of the aspirant (Chinedu) by the party's assembly screening appeal panel.

“Among the reasons for the disqualification of Orji junior who is gunning for Umuahia central state constituency, was the allegation of being a member of a secret society, the Black Axe Confraternity.

“A confessed member of the society in Umuahia had identified Chinedu as not only a fellow member, but actually the Capo (Head) of the cult.”

That is not only false but also embarrassing and offensive as the totality of this publication is also diversionary and made in bad faith.

The said offensive publication is hereby refuted as not only being offensive but also defamatory in nature, false, mischievous and devoid of any shred of proof and maliciously made by the reporter in a bid to assail the hard earned integrity of Engr. Chinedum Orji.

It is on record that Engr. Chinedum Orji is not, and has not been a member of a secret cult as alleged in the said publication.

It is also on record that Engr. Chinedum Orji in a show of humility and compliance with the PDP rules and regulations presented himself for screening at the Finbarrs Road party secretariat on the 6th and 7th November 2014, wherein he was vetted and screened and consequently was issued a provincial clearance certification dated 7th November 2014 with serial number: 0000027 and Chinedum Enyinnaya Orji boldly written on it.

And there has never been any indictment or petition against his candidacy for any appeal panel to look into and hence there was no disqualification whatsoever. That one begins to imagine the source of the said publication which is at best the figment of the imagination of the reporter which is highly defamatory, maliciously made to injure the credit, character, reputation of Engr. Chinedum Orji to public shame, ridicule, odium and contempt for which it's demanded that the said false and defamatory publication be retracted forthwith with apology as there must be a limit within the law of freedom of the press not when it's as instant case, scandalous, embarrassing and defamatory.