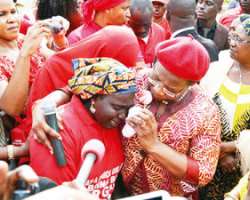 The #BringBackOurGirls group will today storm the Chadian Embassy in Abuja to protest against the alleged supply of weapons by its government official.

The group, which has been advocating for the rescue of the remaining 219 school girls abducted from Government Secondary School, Chibok, seven months ago, wondered why the government of Chad has always been fingered in the fight against the Boko Haram insurgency.

BBOG further listed issues such as the botched ceasefire deal which was celebrated across the country and handled by the Chadian President, Idriss DÃ©by, and now the report of Mr Mahamat Bichara Gnoti, his close associate, as very implicating of the Chadian government.

The group noted that with the ceasefire deal, the Nigeria government and the Nigeria people relaxed and put their trust in the Chadian president, only for the Boko Haram to capture more towns and fail to release the Chibok girls.

Meanwhile, President Goodluck Jonathan had also on Monday paid an emergency visit to Chad where he held a closed-door meeting with the country's president, DÃ©by.

After the closed-door, President Jonathan reiterated the need for Nigeria and her neighbours to intensify joint actions and cooperation to win the war against terrorism and insurgency.

The president, according to Reuben Abati, told reporters that Boko Haram had a lot of external influence from outside Africa and it had become even more imperative for all countries in the region to work together to overcome terrorism and other criminal activities across their borders. – Leadership