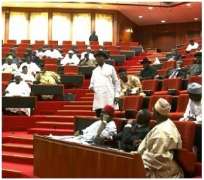 The Senate on Tuesday re-opened after the commotion that rocked the National Assembly last week.

The first assignment of members today was a meeting with Service Chiefs and the Director General of the Department of State Security, (DSS).

The meeting which took place behind closed doors discussed the extension of the emergency rule in the three north east states.

President Goodluck Jonathan had written to the House of Assembly requesting an extension of the emergency situation following continued violence in Adamawa, Borno and Yobe states.

The Service Chiefs who appeared could not attend last week's session because of the rowdy situation at the National Assembly while members of the House of Representative forced themselves into the complex, having been locked out.

The incident forced the Senate president, David Mark, to shut down the National Assembly until today.

Those in attendance were Chief of Air Staff, Air Vice Marshall Adesola Amosu; Chief of Army Staff, Lt. Gen. Kenneth Minimah; and the Director of the Department of State Service, Mr. Ekpeyong Ita.

The Senate spokesperson, Senator Enyinnaya Abaribe, who spoke with journalists after the eight hours brainstorming session, explained that the military identified problems of troop, equipment and other auxiliary problems as their major challenges.

Abaribe said the issue of emergency rule was not discussed throughout the meeting but explained that the service chiefs noted that the extension was necessary to enable them to perfect their operations in the troubled states.

He said, 'The question of the state of emergency was not what is on the table today. We are going to wait until it is brought to the floor of the Senate and we will discuss it.

'What the Senate did today was to separate the two questions (insurgency and the state of emergency).

'Of course, the military continues to insist that they need the state of emergency to be able to conduct operations in a manner that would bring it (terror war) to a quick resolution.

'When the Senate now takes the question of the state of emergency you will be there because it would be discussed in open plenary.

'We found from the briefing of the service chiefs that we have some problems which had to do with the levels of equipment and other auxiliary problems where you have to fight an asymmetrical war and not a normal conflict.

'We are very glad that the military at this moment, is gearing up itself to be able to deal with this asymmetrical conflicting in the North-East of Nigeria.

'As of today, we can assure Nigerians that the military is up to the task of dealing with this matter.'

He added that the matter of the Senate and what happened last Thursday (the National Assembly invasion by the police) would be discussed on Wednesday (today ) during open plenary.

On why the Inspector-General of Police was not in the Senate on Tuesday, Abaribe said the police officer was not part of the service chiefs.

The senator also said that he was not aware that the IGP was invited by the Senate to appear before it on Wednesday (today ).

The Senate spokesperson equally stated that he was not aware whether President Goodluck Jonathan would send another letter to the Senate on the emergency rule extension since the last one had expired last week Thursday.

The Senate President, David Mark, said the Senate discussed extensively with the service chiefs and noted the challenges and the progress made by the Armed Forces in the fight against insurgency in the North-East.

Mark, who described the meeting as a very robust discussion, added that the Senate would have discussed in plenary the incidents that happened last week Thursday, but because the senators spent the whole day on the insurgency situation.

Meanwhile, the Senate spokesperson has described the reported moves by some senators to initiate impeachment proceedings against Jonathan as a rumour which he would not make any comments upon.

Abaribe, who was reacting to a question on the update on the alleged exercise, said, 'The issue to me is still a rumour and I won't comment on rumour.'

However, a senator who craved anonymity told our correspondent that the matter would have been tabled before the Senate on Tuesday but for the long hours spent with the service chiefs.

He said, 'We are still on the matter. As a matter of fact, it is a concluded plan which cannot be abandoned. We will surely move the motion on the floor.'

In the meantime, Senate Leader, Victor Ndoma - Egba, had asked the PDP senators to attend an emergency meeting in his official residence by 8.00pm on Tuesday. - Additional report from Punch.