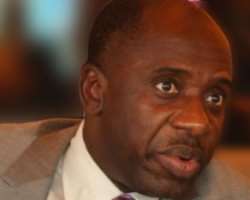 He also claimed that 'there is no democracy yet in Nigeria.'

The governor, who spoke in Abuja on Saturday, insisted that he had no personal quarrel with President Jonathan, adding that if governance could be separated from the President, he (Jonathan) 'remains a good man.'

He, however, regretted that the President 'is supervising a highly corrupt government.'

He described the form of government being practised in Nigeria today as diarchy.

While reacting to the invasion of the National Assembly by the police on Thursday, Amaechi described the action as uncivilised.

He said the actions of the police in recent times had shown that they had been pocketed by the Presidency and the ruling Peoples Democratic Party.

He insisted that his party, the All Progressives Congress, would not go to court if the PDP decided to rig the 2015 presidential elections.

Instead of going to court, he said the APC would form a parallel government.

He said, 'What is the essence of going to court when the Federal Government don't obey the law. That's why the APC say we won't go to the court any longer. If you rig us out, we would rig ourselves in; which means if you think you can rig us out in 2015, we will form our own government. We have met on that and we have agreed on that. We will instal our own government and there would be two governments.

'The only way to avoid a parallel government is to have a free and fair election. You can't continue to use the police as if it is a private agency or company of the government.'

While saying that the Police in South Africa is currently investigating President Jacob Zuma, he wondered if the police in Nigeria would be allowed to play such a role in the country.

'Are you aware that the President of the South Africa is being probed by the police? Can that happen here? In this country, they slap judges. Seven members of a state (Ekiti) House of Assembly claimed they have sacked a Speaker,' he added.

On Boko Haram, the governor said it would be difficult to convince Nigerians that the Federal Government was not deliberately allowing the crisis to continue in order for it to decimate the votes that would come from the North-East in 2015.

The zone is considered to be a stronghold of the APC.

Amaechi said Nigerians knew the capability of their soldiers, who he said went to Liberia and liberated the country from the hands of the rebels only for them to be having problems dislodging a rag-tag army of insurgents in the country.

He said, 'The Federal Government deliberately allowed the Boko Haram to overrun many villages in the North-East. If it is not a political agenda, why would the military not be able to chase away the rag-tag army of Boko Haram?

'If they are not afraid of the APC, let them restore law and order. The zone is in the hands of the APC. Borno, Bauchi, Gombe, Adamawa and Yobe states are all APC states. The only state where it could be 50:50 is maybe Taraba State. Apart from this, other states in the zone have always voted for Maj.Gen. Muhammadu Buhari, one of our presidential hopefuls.' Punch