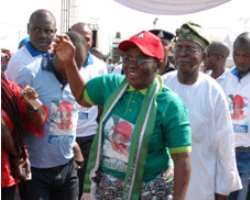 Delta Governorship aspirant Dr. Mrs. Esther Uduehi, acknowledging cheers from supporters at her formal declaration in Asaba Cenotaph, with her Husband Engr. Dele Uduehi directly behind her.
Listen to article

Anyone in Asaba, Delta State capital, on Thursday, November 20, 2014, would have noticed a colourfull environment off Okpanaam Road. There was also sweet gospel music in the air being rendered by gospel award winning artist, Chioma Jesus. Passersby wondering what was going on, were adequately infomed that it was declaration of the front-runner for the position of Delta State governor in 2015.

Former Presidential Adviser and immediate Chairman of the Governing Board, National Commission For Mass Literacy, Adult And Non-Formal Education, Dr. (Mrs.) Esther Kelicha Uduehi, formally declared to run for governor of Delta State in 2015, amidst a mammoth crowd of supporters and Peoples Democratic Party (PDP) stakeholders drawn from all twenty-five (25) Local Government Areas of the state.

Of all the declarations so far done in the State, hers was hitch-free with a cross-section of supporters without any rented crowds. All her coordiantors from all the LGAs and wards commented about her sellability as a candidate. The Chairman of the occassion Gen. Philip Onyekwele, also commended Dr. Uduehi and encouraged all Deltans to support her. The elder Sister of Dr. uduehi and former Secretary to Delta State Government (SSG), Dr. (Mrs.) Beatrice Omeni was present along with another Sister, Professor Osakwe of Delta State University, Abraka.

The Director General of her campaign, who was represented by Hon. Solo Ebinum, stated in his welcome address that “Deltans, we have gathered here today to present to you: a lady who will continue the developmental strides of this administration; a lady who will placate the desires of Delta Central, where her mother is from, Delta North where her father is from, and Delta South where she grew up.”

There was thunderous applause from the crowd when she stated, “I, Esther Uduehi hereby declare to Deltans that I want to serve you for the office of the Governor of Delta State come 2015.”

In her declaration speech, Dr. Uduehi stated that “I believe that Oil will not last forever and so I commend the vision of 'Delta beyond Oil'. We shall build on it and strive to fully industrialize Delta State to provide a robust economy that can generate employment for our teeming youths and people. We shall place great premium on Food Sufficiency and Security to ensure that all Deltans irrespective of age, tribe or sex have food to eat, and clean water to drink and can operate in secure and safe environment. To achieve my human and infrastructural objectives, innovations will be introduced which amongst others will include the setting up of an active State Economic Council that will include at least one person from each of the twenty-five (25) Local Government Areas. “

While laying out an 8-point manifesto, Dr. Uduehi also added that she will “focus on and give equitable priority to Education, Health and Socio-Economic welfare of the people.”

Shortly after the declaration she was asked by journalists to summarize her Mission/Vision for Delta State, which she succinctly put as follows: “I envision an economically strong and highly industrialized Delta State, where everyone irrespective of tribe, age or sex has a sense of belonging and is therefore determined to give their best and be part of the development process of the State. My mission therefore is to further rebuild and restructure Delta State, improve on what has been started and heal any deficiency, while strengthening ethnic relationships so as to reconnect them for greater and harmonious bond to achieve real peace and security for the total development of the State.”

The Apex Urhobo Progress Union (UPU) was represented by four (4) traditional chiefs who re-stated UPU's earlier statement that Dr. Uduehi was one of them and very acceptable to Urhobos as the next governor because her mother is Urhobo.

All the crowds present were essentially happy with her manifesto and impressed with her pedigree. They echoed the sentiments of listeners that called in to NTA Show Standpoint two days early that “Delta needs a woman like her.”

The standing ovation and response was a test of her popularity, which she passed with flying colors. There are roughly two weeks remaining before the primaries and all opinions seem to be that Dr. Mrs. Esther Uduehi is the candidate that will prevent the party from fragmenting in the Delta State and also ensure a victory for President Goodluck Jonathan.

*Rev. Akpodiete, a public affairs analyst writes from Asaba. He is also Editor-in-Chief of Politics Governance. Contact him on 08138391661 or [email protected],