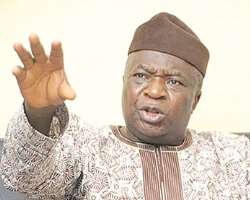 The Fountain of Knowledge, as Ekiti State is called, erupted in chaos, last week, making some observers to describe the state a FOUNTAIN OF IDIOCY. In this interview with the Speaker of the state House of Assembly, Dr. Adewale Omirin, he alleges that Governor Ayo Fayose has made the state hot for the legislators, prompting the relocation of 19 members to Lagos.

He pooh-poohs his alleged removal from office, insisting that seven law-makers in the 26-member House cannot impeach him.

'That is the type of thing that the governor encourages', the Speaker explains.

Indeed, Fayose has already told the world that he recognizes the member elected from among the seven Peoples Democratic Party, PDP, legislators as speaker 'without apologies to anyone'.

Omirin traces where the problem started from and why men of goodwill should rise to rescue the state from the shenanigans going on. Excerpts:

What is the problem in your state, Ekiti?
The governor was inaugurated on October 16, 2014.

Right here on Channels TV, the governor-elect said I was preventing his inauguration.    He even went to the market to tell traders there that I did not want him inaugurated - inciting the people against me.

Now, because of the incitement, I chose not to go for the inauguration because I did not want to be lynched.

What was the basis for this claim of yours?
Hon. Omirin
He said I wanted to become acting governor.
And I have repeated it over and over that if there is anybody with information on such an ambition of mine, the person should come out with facts and evidence.

With that background, I did not go for the inauguration.

But in the stadium, where I would pass before getting to the stand is quite far and anything could happen.

Yes, you may say I have some security men working for me but how many people would they be able to stop?

Who did you tell about your fear - that is, the issue of the people being incited against you?

I communicated with the Chief of Staff to the governor.

And when he came in, with the charged atmosphere that he was planning to overrun the Ekiti State House of Assembly, we decided to go on a month's recess, believing that things would calm down.

But that recess, don't you think it was malicious?

The House can regulate its activities.
Look, if we say we are going on a month's recess today, the recess can be called off once the governor brings an urgent request before the House.

At the time of going on that recess, there was no such request before the House

But he brought a request for the clearance of commissioners?

Yes, that was very recently.
How did you treat that?
We did not approve it.
He brought the request for the clearance of three commissioners.

I called them to my office privately and explained to them the workings of the House, explaining to them that we had just read the letter but that the following day, a Friday, we do not sit; but that I would appeal to our members to sit on that Friday and take their screening.

I made a personal appeal to them.
The governor, realizing that his party didn't have the majority, appealed to members of the House to work with him and not make life difficult for him.    You people appeared to have agreed to work with him.    So at what point did matters take a bad turn?

We agreed and promised that we were ready to work with him.

We held two meetings with him and we made him realize that the Ekiti project is what is paramount to us.

There were reports that you gave him conditions?
No!    We merely told him that the development of Ekiti State remained paramount; that whatever he would do to promote development, we would support him; and that he must rule with the fear of God and obey the rule of law.    We made him understand that any illegal thing would never be supported.

The last meeting we held with him, he spoke to us like a governor and we spoke to him as fellow indigenes of Ekiti State.

It was at that meeting that he told us he would be sending the name of his attorney general and that we should please screen him because he needed him to sign a document.

There and then I stood up and said that we have a problem. I told him, 'Your Excellency, since you came to power, you have been chasing some members of the House who were cleared before you came in but the fear is that sitting to screen your nominees may pave the way for something untoward to happen'.

It was then he said we should set up a four-man committee to see him.

That was our last discussion with him.    We did not give him any conditions.

There are some allegations against you too.    One of such is that your party has promised that you would become acting governor and that you had even made preparations to assume office?

We are in a season of drama in Ekiti State.I have said it over and over, that I was elected into the House of Assembly and it was the members who elected me as Speaker. I did not contest to be governor. That is what Governor Fayose has been saying even before he became governor.

The other day he accused me of collecting N100m to impeach him.

Even the day I appealed to these commissioners that we were going to clear them on Friday, that very evening, it was all over the state radio and television that I demanded for N135million and that we would not screen the commissioners.  This happens on daily basis in the state; if it is not the Speaker, it will be about APC.

This is just three and a half years of the assembly and we have passed 71 bills. This is unprecedented anywhere in these country in the history of any House of Assembly.    We have screened commissioners and we have never demanded for one kobo from any of them neither have we demanded any money to pass any bill.    The commissioners are alive and well, let them come out and tell the world if we ever demanded for or got money from them to do our job.

The governor's associates claim that things were going on well until you came to Lagos?

I did not come to Lagos.    The last time I was in Lagos was the third day after he was inaugurated. After the meeting we held in his office, I had not visited Lagos until now.

But why come to Lagos now instead of doing your work?

We are not safe in Ekiti and we cannot even air our views.

The governor has said he would work with the new Speaker?

Of course!    What do you expect from him?    He masterminded the show.

But let us for once be reasonable: How can seven members sit and say they are sacking 19 people.    19 of us are in Lagos as I speak to you now.

These seven members were driven to the assembly in the governor's vehicle.

They were escorted there with about 300 armed policemen.

The seven members say you left your duty post improperly and they quote Section 27 of the Standing Order as the basis for what they have done.    In fact, your colleagues say a five-man committee was raised at plenary to negotiate the collection of N135million from the governor?

The day they are referring to was the day we read the request about the commissioners and we had even cancelled the recess.

But even the Constitution of the Federal Republic of Nigeria is clear that you can only impeach a Speaker with two third majority of members of the assembly.    We are 26 in the Ekiti State House of Assembly, so for you to impeach the Speaker, you need 18members, not even 17.

But why were you not in the assembly the next day?

We were prepared to go there but some of our members who had been there earlier were turned back.    They were not allowed into the premises of the state assembly.    As early as 8am, the assembly complex was filled with armed policemen.

That day we were supposed to sit, the governor instigated people against members of the assembly and, if you had attempted to go to the assembly, you would be moving against a train

This N135million bribe issue couldn't have just been floated.

I had a meeting with them in the Chief of Staff's house and, as soon as we finished the meeting, these same people said because the governor was going for a loan, I should go and negotiate a percentage with the governor.

Governor Fayose is alive, let him come out and disprove what I'm saying here.


Nobody mentioned any figure.
Well, we have decided to go back to Ekiti State and we want Nigerians to know that we are going back and we will wait and see whether he will use the police, the same people whose pay is derived from your tax and my tax, let us see what next the police would be used for.

Here is a governor who withdrew all my staff, sacked all my aides including my PAs, cut off power supply to my accommodation. Vanguard