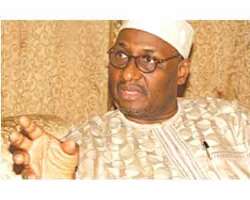 Speaking with Vanguard yesterday, Mua'zu said this was not the time in the political situation of the party and the country to argue over the issue of resignation when the party was presently preparing for the 2015 general elections.

According to him, 'our presidential candidate, President Goodluck Jonathan has just declared for his re-election next year, all hands should be on the deck as we should collectively work together as members of PDP, as one happy family to ensure victory for the president and all the PDP gubernatorial candidates that will be produced at the December 8 primary elections.'

In a letter of resignation obtained by Vanguard, Bamanga Tukur had in a letter dated January 15, 2014 resigned as National Chairman of PDP.

'My resignation is in the overall interest of the party. I remain available to offer my contributions accordingly to the party, whenever it is needed.

'Thank you and please accept the assurances of my highest esteem always.'

Meanwhile, the National convention of PDP has been fixed for December 10/11 where the party would first use the first day to ratify Mua'zu as National Chairman while the second day would be for the national convention proper for the ratification of President Goodluck Jonathan as the party's candidate for the 2015 Presidential election.