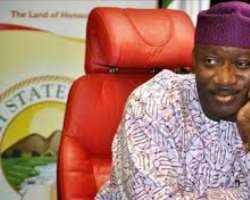 It is unfortunate that we are in a country where people who should naturally bury their heads in shame still speak.

Aides of a supposed Comrade Governor, who looked a hapless widow in the eyes and told her to "go and die" ought to know that they lack moral rights to speak in a saner clime.

However, because we are in a Nigeria where anything goes, aides of a governor like Adams Oshiomhole, who relocated the sittings of his State House of Assembly to his bedroom in the Edo State Government House can open their oppressive mouths and defend the indefensible.

Here we are with a supposed progressive Comrade Governor perpetuating ilegalities in Edo State with lawmakers of his party, APC sitting exclusively in the Government House where he resides with his wife and children, and instead of his aides to remove the timber in their boss' eyes, they are getting concerned with the toothpicks in another person eyes.

The reality is that whether the APC lawmakers are 15 or 5, the lawmakers cannot sit anywhere else apart from the State House of Assembly. Or are they saying that the National Assembly can also relocate to Tafawa Balewa Square in Lagos?

It is our advise that Governor Adams Oshiomhole should solve the problems in the Edo State House of Assembly and stop meddling in the Ekiti State affairs because on June 21, 2014, the people elected their governor in person of Peter Ayodele Fayose, and millions of APC evil machinations cannot stop him from governing Ekiti State for four years.