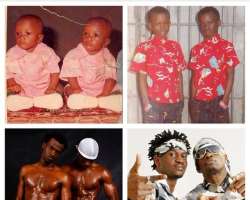 Nigeria's singing sensation brothers, P-Square are in merriment mood as they added another year today November 18th, 2014. The duo not only celebrating, but also released the video to their new song 'Shekini' which has already been enjoying massive preview during the rehearsal session on the internet.

Just same month, Peter Okoye, celebrated the one year anniversary of his marriage to his lovely wife, Lola Omotayo.

As fans have continued to show love the duo, Lola Omotayo, took to her social media page to celebrate the duo revealing that they are actually one and not two and they need to guide each other at all times

In her words, “Wishing you @peterpsquare and @rudeboypsquare a very happy and fulfilled birthday. You be ONE ?no be two! May the Almighty God continue to guide and protect you two, May you always remember that the same blood runs through your veins and therefore you must always be there for one another and love each other no matter what. May your light continue to shine bright and May you have long life, good health, wisdom and peace of mind. GOD BLESS YOU BOTH NOW AND ALWAYS!! We love you!!!!

In 2001, "P-Square" won the "Grab Da Mic" competition, and hence Benson & Hedges sponsored their debut album, titled Last Nite, which was released under Timbuk2 music label. P-Square was also nominated as "Most Promising African Group" in the Kora Awards three months after the release of their debut album. They eventually won the 2003 Amen Award for "Best R&B Group".

In 2005, they released their second album, Get Squared under their own label, Square Records. This album was marketed nationwide by TJoe Enterprises, although they were still managed by Howie T of Adrot Nigeria Limited. The video for the second album held the #1 position on the MTV Base chart for four straight weeks.

They have an ever growing fan base across South Africa with a particular stronghold of diehard fans in Cape Town.

The group has performed alongside the following international artists like Ginuwine, Sean Paul, Akon and Busola Keshiro and the likes.

On September 14, 2014 P-Square released their 6th studio album titled Double Trouble.
Happy birthday guys from the staffs of Nollywoodgists.com and many more years and joy to your days on earth.