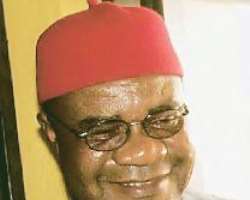 The polity in the Peoples Democratic Party [PDP] appears heated up and agitated. Sources reveal to ukpakareports.com of the clandestine moves within the power block in Abuja to remove the present PDP Chairman – and replace him with the former acting national secretary, Bernard Eze. Bernard Eze is from Enugu State.

As gathered, the removed PDP chairman has begun prepping to join the 2011 gubernatorial race in Abia State. Already, Abia State political engine house appears overheated following the power wrangling between the said godfather of the state governor and the state governor. This is as the state governor ha found himself nursing the idea of decamping from the Peoples Progressive Party [PPA] either the Action Congress [AC] or the PDP.

For this reason, Abia Gov Theodore A. Orji [TA] has been seeking various options to escape the political death kneel passed on him by his estranged godfather, Orji Uzor Kalu. The relationship between both men has broken down that they are no longer on speaking terms. On his part, Orji Kalu has sworn that TA Orji will never return to power.

Initially, TA toyed with the idea of abandoning the governorship race and going into the senate but his associates and kinsmen urged him to fight on as a sitting governor.

In doing so, TA has taken away the lucrative Internal Revenue contract from companies controlled by Orji's mother, Mother Excellency Mrs. Eunice Kalu, and given it to Bola Tinubu's company, the same company that collects revenue for the Lagos state government and is the source of the friction with Gov Raji Fashola. They are to remit about 600m to the Abia state government and keep 15%, although the company had initially claimed they can remit about N1billion.

The idea was to gain Tinubu's favor so TA can contest under AC for a second term. It is not clear if Tinubu, who co-sponsored Ngige in Anambra with the expectation that his company will get the IGR contract for the state, if Ngige wins, has accepted to invest in TA's re-election.

TA has now started flirting with returning to PDP. He is financing a group led by one Allen Nwachukwu, which is openly campaigning for his return to PDP. But all the major players in Abia PDP have resolved to stop him or rally to deny him ticket if he returns - Onyeama Ugochukwu, Vincent Ogbulafor, Ojo Maduekwe

TA has now started flirting with the idea of returning to PDP. He is financing a group led by one Allen Nwachukwu, which is openly campaigning for his return to PDP. But all the major players in Abia PDP have resolved to stop him or rally to deny him ticket if he returns - Onyeama Ugochukwu, Vincent Ogbulafor, Ojo Maduekwe

TA's dilemma now is the ongoing court case against Ugochukwu and PDP at the Court of Appeal in Owerri. As long as the case is on, his returning to PDP is near impossible.

Vincent Ogbulafor is mobilizing to stop TA from returning to the party. The irony here is that it Ogbulafor was the first to approach TA to return to PDP as a way of checkmating the influence of Onyeama Ugochukwu. However, Ogbulafor has since realized that TA's chances of picking the PDP ticket are close to nil as members would oppose him and defeat him in a nomination contest.

Moreover, Ogbulafor himself, sensing that his days as National chairman may be coming to an end, now wants to contest the Abia Governorship election and may agree to step down voluntarily if the Acting President can guarantee the ticket for him. He has instructed the leadership of the Party in Abia state to issue a disclaimer in select newspapers and radio stations against Allen Nwachukwu and those campaigning with him for TA's return. He wants it to be known he is against TA's return.

Ironically, the same Ogbulafor had earlier vigorously lobbied TA to return to PDP as a strategy to dilute the influence of Onyeama Ugochukwu, who he perceives as the greatest obstacle to his gaining control of PDP in Abia state

Already, Dr Jonathan's advisers have penciled former Party secretary, Mr. Bernard Ezeh from Enugu state, as Ogbulafor's replacement. Ogbulafor is aware that his days are numbered and has been making frequent trips to the Aguda House residence of the Acting President to stave off the sack or negotiate for the Abia Governorship ticket, should he fail. Bernard Ezeh is already designing his agenda as the incoming party chairman.

Even more important, Orji Uzor Kalu has sworn he will never allow TA take his hard-won Governorship seat to PDP and has vowed to do everything in his power to stop him, having lost Gov Ikedi Ohakim of Imo state to PDP.