Insurgency: US reiterates no-sale policy on fighter helicopters to Nigeria 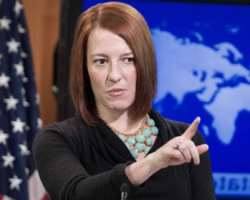 The United States has defended its refusal to sell cobra helicopters to Nigeria, saying the Federal Government is free to buy fighter jets from any other country.

'Nigeria has purchased helicopters that originated in countries other than the US and nothing in our decision prevents Nigeria from obtaining weapons and equipment from other sources,' its State Department spokeswoman, Jen Psaki, said on Wednesday.

Psaki was responding to questions from journalists on the allegations by the   Nigerian Ambassador to the US, Prof. Adebowale Adefuye, that Washington declined to sell lethal arms to Nigeria.

Adefuye had also told members of the Council on Foreign Relations on Monday that Washington was not doing enough to assist Nigeria in combating the Boko Haram insurgency in North-East zone of the country.

He said, 'The U.S. government has up till today refused to grant Nigeria's request to purchase lethal equipment that would have brought down the terrorists within a short time on the basis of the allegations that Nigeria's defence forces have been violating human rights of Boko Haram suspects when captured or arrested.

'We find it difficult to understand how and why, in spite of the U.S. presence in Nigeria, with their sophisticated military technology, Boko Haram should be expanding and becoming more deadly.'

But Psaki said that the US refused to sell the helicopters to Nigeria due to concerns about the ability of the military to use and maintain them.

The cobra is a combat aircraft with the ability to climb at the rate of 8.2metres per second. It is equipped with a 20 mm M197 3-barrelled Gatling cannon in the A/A49E-7 turret (750 rounds ammo capacity).

Psaki said there were ongoing concerns about the Nigerian military's protection of civilians when conducting military operations, adding that these had been discussed with the Nigerian authorities.

The State Department spokeswoman added, 'Earlier this year, we denied the transfer of some cobra attack helicopters to Nigeria due to concerns about Nigeria's ability to use and maintain this type of helicopter in its effort against Boko Haram and ongoing concerns about the Nigerian military's protection of civilians when conducting military operations. We shared those concerns with Nigeria before this decision and subsequent to it.

'We'll continue to look for ways to deepen our cooperation with Nigeria to help it acquire the systems and skills needed to restore peace and security. But obviously, we've provided a great deal of assistance over the past several months.'

Psaki said Washington would not have raised concerns on human rights abuses by the Nigerian military 'if we didn't feel and others didn't feel that they were warranted.'

She assured the Nigerian government that the US   was ready to help Nigeria train and improve the effectiveness of its military.

Urging the Federal Government to investigate allegations of abuses by the military, Psaki stated that the US valued its long standing relationship with Nigeria.

She said that Washington had been offering various forms of assistance to Nigeria, including sharing intelligence with its armed forces .

Psaki said, 'Let me just lay out the facts of our assistance: Over the past six months, the United States has started sharing intelligence with Nigeria, began training a new army battalion and held numerous high-level discussions with Nigerian authorities on additional measures to best address the Boko Haram threat.

'We have also provided and approved sales of military equipment to its armed forces. These decisions are made, of course, after careful scrutiny to ensure they conform with the US law.'

Our correspondents could not get the Director of Defence Information, Maj. Gen. Chris Olukolade, to speak on the issue as calls to his mobile telephone did not connect.

Also, Olukolade did not respond to a text message sent to him.

When contacted, the Director, Communications Division, Ministry of Foreign Affairs, Mr. Ogbole Ahmedu-Ode, said, 'I am in transit right now and I am hearing about this from you for the first time, I can't comment on it. You may ask the Defence Headquarters.'' - Punch.