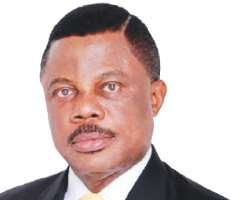 In keeping with his promise to revive moribund establishments and transform workers' fortunes in Anambra State, the State governor, Chief Willie Obiano has graciously lifted the burden off the shoulders of the staff of the State Water Corporation and 108 former Anambra Sanitation and Environment Protection Agency (ANSEPA) staff, by clearing outstanding arrears and allowances owed the two government parastatals by previous administrations to the tune of N1,863,197,452.76k (approximately N1.92 billion).

Of this grand total, the sum of N1, 502,997,239.76k was paid to the staff of Anambra State Water Corporation who were owed arrears of salaries and allowances from 2000 when Governor Chinwoke Mbadinuju was in power to the immediate past administration.

On the other hand, the sum of N360,140,213 being the balance of N711,229,000 outstanding salaries and allowances of about 100 staff of former ANSEPA now called Anambra State Waste Management Authority (ASWAMA) was settled by Governor Obiano being the amount due while the matter was in court.

The former ANSEPA Staff were sacked by the past administration but are presently seeking reinstatement for unlawful dismissal. Judgment is yet to be given on the matter.

This payoff is part of the grand plan of the Obiano administration to heal old wounds and seal every possible crack that will stand in the way of his efforts to move Anambra State forward.

While giving a directive for the liquidation of the arrears of salaries and allowances owed the staff of the two parastatals, Governor Obiano also set up a Committee to ensure that the payment was made to real staff and not ghost workers.

It was gathered that the arrears of salaries and allowances from May 2000 to September 2005 stood at not less than N411, 006,221.11 kobo between the intervening periods of governors Chinwoke Mbadinuju and Chris Ngige while the arrears of salaries and allowances hovered around 435, 471, 803,.87k from 2006 to 2008 when MEDAL Consultants were engaged to x-ray the situation after which the wage bill skyrocketed to billions of naira.

Though the last administration had in 2007 released about N200, 0000,000 as part payment for the outstanding debts it inherited and incurred, the Amalgamated Union of Public Corporations, Civil Service, Technical and Recreational Service Employees (AUPCCSTRSE) through a suit No. NICN/ABJ/120/2013 instituted on behalf of its affiliated workers dragged the immediate past administration to the Industrial Arbitration Court over the huge indebtedness running into billions.

The Union won the case and the past State government filed an appeal but lost it, compelling the Court to issue a Garnishee Order and the judgment was documented in the Federal Republic of Nigeria Official Gazette.

Anambra State Water Corporation came into being by virtue of Edict 3 of 1999 while the Federal Government of Nigeria Official Gazette No. 55 0f 24th November, 1977, Volume 64 declared it as a Public Service.