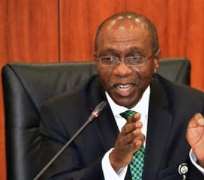 The Governor of the Central Bank of Nigeria (CBN) Godwin Emefiele, yesterday assured that he would continue to defend the naira after the currency plunged to a record low last week.

Emefiele said in a phone interview yesterday from Abuja that “we know our reserves can support nine months of imports, which is far above the minimum expected. We believe we're very safe.”

'There's no need for anybody to panic or worry. The central bank has always intervened. We know our reserves can support nine months of imports, which is far above the minimum expected. We believe we're very safe.'

The naira weakened to an all-time low on Nov. 7 after a drop in crude prices, prompting the central bank to intervene. In defending the currency rate, Africa's largest oil producer has reduced its foreign reserves to a four-month low of $37.8 billion. The naira weakened for a third day yesterday, dropping 0.8 percent to 169.71 per dollar at 10 p.m. in the commercial capital, Lagos.

On Nov. 6, the regulator restricted banks' use of the standing deposit facility, which allows companies to earn interest on excess cash, in an attempt to encourage lending to local businesses. Emefiele said the move didn't weaken the naira because banks used their surplus liquidity to buy short-term central bank bonds.

'After that decision, most of them moved their money to the open market operations window,' he said. 'We took all that money.'

The central bank has been selling dollars to banks outside its twice-weekly auctions since the naira's drop on the morning of Nov. 7, Sarah Alade, a deputy governor, said earlier yesterday in an e-mailed response to questions.

'We have been intervening in the market since Friday,' she said.

The central bank's next Monetary Policy Committee meeting is on Nov. 24 and 25. - Bloomberg.