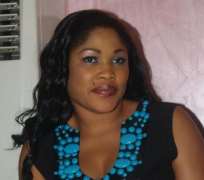 Bisi Ibidapo-Obe featured in a Yoruba flick some years back, many people believe that her character in that movie has a true reflection on her real lifestyle as she's known to live a reckless lifestyle when it comes to matters relating to man and woman.

While Bisi is stepping up in her career as an actress, controversies, however, are not leaving her tail. Aside the numerous men she has alleged of sleeping with, recent scoop reveals that Bisi, sometime ago, was alleged of stealing a gold jewelry that belongs to a friend.

Could this really be true? This event, though, we learnt, happened a while ago, the people who witnessed the disgraceful act, we learnt, still haven't forgiving Bisi for her major role in the missing jewelry.