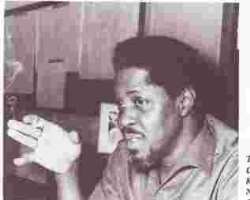 By Toyin Fani-Kayode
' In any case what are the democratic credentials of Powell? That he is serving in a government that rigged the American elections? ....Colin Powell is trying to discharge his duties as a house negro'

The words of Owei Lakemfa 7 June 2001 in The Vanguard, In an article titled Arrogant Powell and Lying BBC.

In the more recent archives of Owei Lakemfa's column in The Vanguard sandwiched between a piece about the living icon that is Nelson Mandela amd the saintliness of John Brown whose works will stand the test of time, lies an altogether more sordid piece entitled Fani-Kayode:The Tales My Father Told Me. As place values go, this was a great honour; however content wise, it would be safe to say it left a lot to be desired, not merely in its factual analysis, but appeared to be more gcse than o level, as it sauntered from Abacha Hitler and Goebbels to...l cant remember what, and betrayed a certain immaturity.

As descendents of Chief R. A. Fani-Kayode,Q.C. SAN, a man much maligned by Owei Lakemfa and his ilk, it may be helpful for you to know certain facts about the history of Nigerian Independence. I am assuming you know the basics.

Owei Lakemfa's 'Lying BBC' broadcast a radio documentary that declared that Britain rigged the Nigerian elections of 1960 http://www.wsws.org/articles/2007/aug2007/nige-a09.shtml ( quite where this leaves Nigeria's democratic credentials, never mind Colin Powells is anyones guess... presumably exactly where they are today) therefore or simply as a matter of course, the files describing the events leading up to Nigerian Independence in 1960 in which my father, Chief R.A. Fani-Kayode played a vital role are held in The British National Archives and are closed to the public and will continue to be closed for the next fifity years. Chief R.A. Fani-Kayode's role is documented elswhere by various historians, Chief Femi Fani-Kayode is best one stop source of these references.

Owei Lakemfa in his column in The Vanguard stated that on night of the Nigerian Military rebellion in January 1966, that Chief R.A. Fani-Kayode was coward the renegade soldiers. This is an absolute untruth as Chief Femi Fani-Kayode stated, he walked out of the house and met them face to face, in order to protect us, his family; having done this, still the soldiers came in. I know as I was there, and there are somethings, even as a child one does not forget. For a list of traitors, turncoats and cowards from this period in Nigeria's history, many of which are still household names and some of which were never brought to justice, l suggest you read Nowa Omoigui's (# link below) well researched article on the events of January and July 1966 and The Nigerian Civil war/Biafran War *http://www.africamasterweb.com/CounterCoup.html #

Owei Lakemfa's calling Colin Powell a House Negro, is l suspect, pure Owei Lakemfa. No rhyme or reason. There is never a valid reason to call a fellow human being a house negro, especially if you think you may one day write a nice piece about how the works of John Brown who in Mr Lakemfa's words 'struck severe blows against slavery..and whose accomplishments will stand the test of time.'

I can only pray that his 'Tales..' for which there is a link below and which he states 'will continue next week' will have been worth it.......

'The officers and (civilians) who planned and carried out the January 15 and July 29 1966 military rebellions have never been tried or convicted before any military court martial although there was an agreement at Aburi that this should occur. This as we know, was overtaken by events leading up to and including the Nigerian Civil war. The only exception made among the January 15 group was for the surviving officers who who not only took part in the January 1966 coup but also participated in the Biafran invasion of the Midwestern Region in August /September 1967. Most officers in this overlapping group were brought before a Military Board Of Inquiry and jailed until 1974 - except Lts. J.C. Ojukwu and Ijeweze (?Igweze) who were retired-eventually dismissed. THEY INCLUDE MAJOR A. ADEMOYEGA...

So , l put LAKEMFA's concluding argument to you,... WAS Fani Power the bold, courageous man who went out to meet the soldiers? Or was he the' jelly fish' EX-MAJOR A.ADEMOYEGA THE JAILED RENEGADE WHO TOOK PART NOT ONLY IN THE JANUARY 1966 COUP BUT ALSO THE BIAFRAN INVASION OF THE MIDWESTERN REGION IN AUGUST/SEPTEMBER 1967 PAINTED? To determine this Mr Lakemfa says we need to look at the motives, in his words ''Femi wants to rehabilitate his father's image while ADEMOYEGA has no reason to portray Fani power as a coward.'

It is quite clear to me, and to anyone who has taken time to view the historical facts, whose image is in need of more than a little rehabilitation here, though quite why Owei chose to do it in this manner is beyond me.