Lets Think And Talk: Outgoing Governors And The Ubiquitous Desire For The Senate Seat 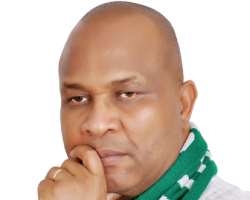 With the primaries of the major political parties around the corner, there continues to be serious trading and speculations about who will get automatic tickets and who may not.

The current political climate is saturated with out-going governors who want to become Senators. So, far it is only a handful of governors that do not want to enter the hallowed red (upper) chambers of the national Assembly, Even those that do not want to go, want to select who goes. In fact, it is only one governor that has come out to say that as a former governor, it will be a step-down for him to go for the Senate because a governor has been a Chief Executive of an entire State, handling budgets beyond the capacity of any sitting Senator. For that ambitious ex-governor, the only option will be to vie for the Presidency.

In fact, political scientists argue that ex-governors make better presidents, as we have seen with Yar'Adua and our current President, in consonant with what has been happening in America with Reagan, Clinton and the Bushes. Obama is the only current aberration in that American perpetuated theory. Anyway, there seems to be no vacancy in Aso Rock at least for members of the ruling Peoples Democratic Party (PDP) until 2019.

Therefore, while the taste of Abuja seems to be palatable to several out-going governors, it is only as far as the hallowed red chambers is concerned.

The dilemma of a few of these governors is that they will have to contend with incumbent Senators that are apparently recalcitrant and refuse to be politically “settled”, whatever that means. Some of the governors interested in becoming Senators in 2015 include: Sullivan Chime (Enugu); Gabriel Suswan (Benue); Liyel Imoke Cross River); Emmanuel Uduaghan (Delta) and Godswill Akpabio (Akwa Ibom).

Some are actually interested in continuous service to their constituents and not because they want to stay relevant in the corridors of power, as some detractors say. Some harsher critics even point out that some of the out-going governors don't have any real professions or that those with a profession cannot make anywhere near the same money in their previous profession as they do in politics.

Another compelling reason could be that unlike the governorship position which is constitutionally limited to two-terms of four (4) years, there is no limit to the number of times a sitting Senator can be re-elected, meaning one could be there for a life time like the American Senator James Kennedy, from Massachusetts.

Some governors are further faced with ether choosing who succeeds them as governor or vying for the Senate in their respective senatorial zone. News filtering through is that the PDP, after a meeting with President Goodluck Jonathan, may have decided to offer automatic tickets to some of their returning Senators.

Some months back, I wrote a piece titled “The Incredulity of automatic Tickets.” It is still my belief that this is antithetical to democracy, as I argued. “The beauty of democracy is the presentation of candidates to the electorate by each political party, who have gone through a credible election (not selection) process in their own respective parties. Unless a party involves just a husband and wife, then we should expect a spirited and keen contest for their party tickets. This will also aid the electorate in evaluating the flag bearers that emerge from the primaries.”

This is also on the backdrop of the opposition All Progressives Party (APC). possibly offering automatic ticket to their incumbent House of Representatives members to make sure they protect Speaker Aminu Tambuwal from impeachment.

Where is our democracy heading? Part of the rationale for offering automatic tickets to some Senators is because our democracy will supposedly be enriched, at least the legislative arm, if we tap into their experience. The Senate President David Mark, who has been in the Senate since 1999, is one of the protagonists of this argument. However, the counter-argument is that it is an affront to democracy to deny the out-going governors their constitutional right to contest for a seat to represent their respective Senatorial Zone.

These governors are imminently qualified under Section 65 of the 1999 Constitution of the Federal Republic of Nigeria, as they have a school certificate, are at least 35 years of age and are expected to be sponsored by their political party. This is exactly identical to the qualifications to be a governor under Section 177 of the same constitution.

Imposition of any kind also denies the people a plethora of great candidates from which to choose. We cannot on the one hand complain about governors imposing their successors and on the other hand impose Senators on the people. If what is good for the goose is also good for the gander, give the governors and everyone an opportunity to vie for the Senate. These can only deepen our democracy.

Restating the obvious: giving automatic tickets denies people choices. Furthermore, it forecloses competition. More importantly, it is a clear violation of Section 87 of the 2010 Electoral Act.

Think about it!
*Rev. Akpodiete, a public affairs analyst writes from Asaba. He is the Editor-in-chief of Politics Governance and also an aspirant for Udu/Ughelli North/Ughelli South Federal Constituency in Delta State. Contact him on 08138391661 or [email protected],