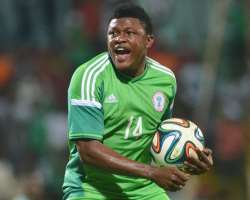 Nigeria made up of players from the domestic league were more purposeful than the Black Meteors and simply out muscled the Ghana U23s in a game watched by three Presidents led by Nigeria's Goodluck Jonathan.

Local boy Emem Eduok made history by scoring the first goal in an official match at the Akwa Ibom Stadium in the 35th minute, when he headed Nigeria in front off a cross from the right by Solomon Kwambe.

The energetic Eduok has scored 20 goals this season to equal an all-time record set by Jude Aneke three seasons ago.

The lively Dolphins striker came close to doubling his tally in the 56th minute but his half volley from outside the box missed the target with Ghana goalkeeper Richard Ofori well beaten.

And his 78th minute strike was too weak to trouble the Ghana shot stopper.

A minute later, Eduok's cross from the left was smashed against the crossbar by substitute Mfon Udoh.

Nigeria midfielder Bobby Sokari was denied a goal in stoppage time by a goal line clearance by Nti Mensah.

Ghana, handled by former Kano Pillars coach Malik Jabir, chased the game in the second half.

Blac Meteors defender Yamoah Richard was sent off two minutes from the end after a horror tackle on Tony Edjomarigwe.

Assistant coach Daniel Amokachi led out the team with Stephen Keshi watching from the stands.