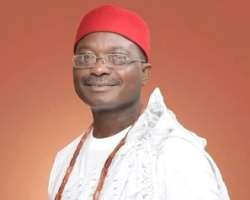 Mr. Anthony Obuh, a governorship aspirant in Delta State under the Peoples Democratic Party was on Friday endorsed publicly by the State House of Assembly and the State Executive Council.


The ‘Special Moment’ which heralded a rally at the Cenotaph where Obuh made public declaration that he is running for the governorship of the state, was graced by reprensatatives of the state government.


Obuh in his address promised to continue with the programmes of policies of the present government in Delta State.


'Our policies, programmes and projects would be built around the economic development of the strategy of Delta Beyond Oil. Its key elements include the building of strategic infrastructure to diversify the economy of the state from oil-dependence to non-oil dependent economy,” he stated.


Obuh said his vast experience in the civil service had prepared him for the challenges of governance, and he would use it optimally as governor.


Similarly, the State Executive Council also declared its support for the candidacy of Obuh. The decision of the SEC was announced by Dr. Joseph Otumara, the Commissioner for Health.

On his part, the Director General, Project 2015, Chief Fred Majemite, said Obuh's government will be all-inclusive and would unite the divergent views of the people for their common good.


'Today, we present the face of a new Delta State, the builder who will build and consolidate on the solid foundation and cornerstone laid by the previous and present administrations of Dr. Emmanuel Uduaghan,' Majemite said.