Synagogue Inquest: Before we resort to blasphemy... 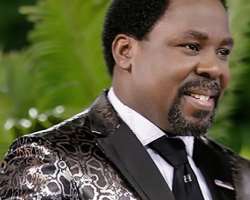 On 5th November, the man of God at the Synagogue Pastor T.B Joshua was supposed to take to the witness box. I would not be surprised if lawyers representing different agencies, NGOs and individuals have already prepared questions that border on blasphemy.

Jesus Christ stopped storms, why did the man of God fail to suspend the church building in mid-air at least till everyone inside escapes? The man of God saw visions of landslides, plane crashes, sudden deaths and political triumphs all over the world. Why did he fail to see the collapse of his own building? Questions like these should be expected from some lawyers at the inquest who have shown complete disconnect from its purpose at the expense of show-off and braggadocio.

Last week for two days, the eminent Professor of Pathology, Prof Obafunwa and representative of the Red Cross were drilled as if both were on trial. Listening to these lawyers, one could even conclude that the Prof. and the Red Cross caused the death of over one hundred residents of the church hostel! The fact remains that a pathologist shall find out that a man who falls from a thirty-storey building and another who was pushed from the same height will both die of the same cause-traumatic complications.

The Red Cross man who was at the scene with an ambulance and over ninety volunteers was drilled for the inefficiency of the State Emergency Agencies personnel who came to the scene of the building collapse, where hundreds of people were trapped, with cameras and microphones only. Haba! And for five days, inexplicably, the State Government did not send a single ambulance to help evacuate the wounded or dead.

Eighty-four South Africans, not taking other Nationals into consideration died. President Goodluck Jonathan himself recognizing the international relations implications visited. Lagos State Governor, Raji Fashola visited in person but his body language and subsequent actions seem more directed at fault-finding rather than fact-finding. His Commissioner for Town Planning himself concurred to the fact that building plan approvals do not necessarily immune buildings to collapse that may be due to structural defects in construction, natural disasters or sabotage.

To worsen matters, the visit of President Goodluck Jonathan has been politicized by the ruling Party in Lagos forgetting that the President and not Lagos State Governor is directly under fire from the nations whose citizens died. Or how can we explain the loud silence of supposedly progressive APC in whose domain the tragedy took place? Not a single word of condolence or commiseration has been heard from the party more than forty days after. This is an aberration on the part of Governor Fashola. But for APC, it is inexcusable.

Now to the security aspect of the whole matter, let us refresh our minds that on 11th September 2001, the twin storey World Trade Center buildings were brought down in America.

On the anniversary of the incident, precisely on 11th September 2014, a Nigerian Air Force plane was declared missing. All news about the whereabouts of the lost plane and the pilot came from Boko Haram, our tormentors.

A day after the Sept 11th anniversary - that is, on 12th September, citizens of Ikotun woke up to the frightful sight of a military plane flying so low, several times above their buildings. Within the hour, there came rumours that Synagogue Church “had been bombed”. The flight stopped and ambulances took over, hauling dead bodies in their tens to different hospitals.

Only after the inauguration of the inquest, exactly about two weeks ago, did these military maneuvers return, in a highly congested area.

Questions arise as to:
(i) Why didn't the NAF continue with their military exercise after it flew over the Synagogue building so perilously for four times in 24 minutes while the building collapsed within an hour of the last flight?

(ii) Why is the flight pilot and NAF not at the inquest if only to state their own side of the story?

(iii) Why did it take NAF and NAMA so long to own up to knowledge of the flight?

(iv) Why did the NAF exercise not resume before the inquest?

(v) Why is a thickly populated residential area being used for such military exercise against normal practices? What has happened to coastal areas such as Badagry coast, thick forest areas in Ogun State or better still Sambisa forest?

(a) Demolition and explosive
(b) Structural and building engineering
(c) Security and air space management
(d) Inter-governmental relations to properly investigate and find out:

(i) The possibility of a 6-storey building “sinking” within 5 seconds as in the case of the SCOAN building;

(ii) The possibility of sabotage and the inherent security threat to the nation;

(iii) The possibility of soil structure and general structural incongruence, resulting in the building collapse;

(iv) Any other lessons that may be learned to prevent future occurrences.

This, I believe, will serve more useful purpose.