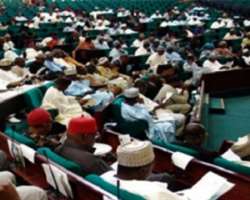 The Peoples Democratic Party members of the Senate on Wednesday forced the Senate President, David Mark, to adjourn sittings till next week amidst protests from his colleagues over the ward congress whgich they alleged turned out against them. The PDP caucus in the red chamber, which was protesting the alleged maltreatment by President Goodluck Jonathan and the leadership of the party ensured that no issue was tabled for discussion before the Senate Leader, Victor Ndoma-Egba, moved motion for adjournment. But before approving the impromptu adjournment, Mark explained that the Senate's decision was in solidarity with their colleagues in the House of Representatives, over the withdrawal of the security details of the office of the Speaker, Mr. Aminu Tambuwal. 'We are not to interfere in the internal affairs of each house. However, as Chairman of the National Assembly, I cannot fold my arms or pretend that all is well about the current crisis. 'I am, therefore, going to do all I can to resolve the current impasse. Furthermore, the matter is already in a court of law; we cannot therefore discuss the issues here. I want to assure all of you that I will do the needful to protect and defend the legislature at all cost.' Shortly after his speech, he led all the senators into a closed door meeting in one of the committee rooms within the complex to further perfect their strategies