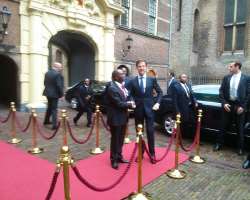 The speech of the Prime Minister of Democratic Republic of Congo, His Excellency, Mr. Augustin Matata Ponyo on his official visit to the Dutch Prime Minister, Mark Rutte on 29th October 2014

On behalf of His Excellency, Mister Joseph Kabila Kabange, President of the Democratic Republic of Congo and Head of State, please allow me to express my gratitude for extending your invitation to the Democratic Republic of Congo, through my humble person, to undertake an official trip to the Kingdom of the Netherlands.
My country is actually honored and has accepted the invitation addressed by His Excellency, Mister Mark Rutte, Minister President of the Netherlands. This fact demonstrates the excellent relationships between our two countries.
Before anything, I would like to cease this opportunity to reiterate the sincere sympathies of the DRC Government to the Dutch people and to His Royal Majesty King Willem -Alexander. Indeed, the Democratic Republic of Congo did sympathize with the Netherlands, following the crash of the MH17 plane in Ukraine which took the life of all the passengers, including 154 Dutch citizens.
The Netherlands: main commitments to the DRC
The Democratic Republic of Congo has faced recurrent armed conflicts, and the Netherlands is one of the key players who has relentlessly worked towards sustained restoration of peace, security and stability in the Great Lakes region. Through its contribution to the STAREC, the Stabilization Strategy of the Eastern Congo, the Netherlands accompanies us in urgent and indispensable reforms implementation aiming at ensuring peace and security to the people of the Eastern Congo.
As you know, with the support of the UN intervention brigade, the Democratic Republic of Congo Armed Forces (FARDC) was able to defeat the 23 March rebel Movement, the M23. This Movement has caused terror and violence against civilian population in the Eastern part of the DRC. Since the end of last year, a peace plan has been signed in Nairobi, Kenya to ensure peace and stability in this part of the country. Given the geostrategic position of the DRC in the region, peace and security will enable the country to play its important economic role within the regional integration framework.
As far as economic relationships between the DRC and the Netherlands are
concerned, I note that some economic instruments have been set up these last years by the Dutch cooperation. These include namely support programs to infrastructures, innovative trade projects through a joint venture between a
Congolese company and a business partner in the Netherlands. These programs also support Congolese small and medium-size enterprises through practical advice and imports from developing countries. Finally, they help to ensure sustainable capacity-building for competitive exporters by assisting them in selling their goods in European markets.
I would like to reiterate here my country's commitment to strengthen structural cooperation with the Netherlands, one of the world great exporters of agricultural commodities and an economic development model for most of African countries.
I therefore invite the Netherlands to get involved all the more in peace building, which is the foundation for the Democratic Republic of Congo's reconstruction.
Hence, I strongly believe that economic relations between our two countries will be strengthened through a sustained and fair cooperation between private sectors of both countries. It makes no doubt that the private sector constitutes the required engine for business creation, employment and economic growth.

III. DRC: One of the ''giants'' of Africa with multiple investment
opportunities.

For some years now, the Democratic Republic of Congo is definitely committed into bold and vigorous reforms aiming at stabilizing the macroeconomic framework, promoting governance, strengthening the State effectiveness, fighting corruption and improving the business climate for a sustainable growth.
Few indicators evidence the trajectory that the country has embarked on, corroborated on the one hand by multilateral institutions such as the IMF, the World Bank and the AFDB, and on the other hand, by international rating institutions, namely Standard and Poor's and Moody's.
These last years, under the leadership of the President of the Republic, we have maintained the macroeconomic framework stability, vigorous and resilient economic growth, despite very difficult internal and external environment.
IV. Progressing economic growth and key economic indicators

In effect, from an annual average of 5.4% between 2002 and 2009, economic growth has increased to 7.4% between 2010 and 2013. In 2014 based on the first six months production data, economic growth is projected at 8.9%.
From the added value standpoint, this growth is driven by the mining activities, the telecoms, the wholesale trade and agriculture. From expenditure standpoint, it is substantiated by public consumption and investment.
This performance in terms of economic growth was made possible thanks to a remarkable macroeconomic stability. This resulted in the implementation of courageous budget and monetary policies which led to low price fluctuations.

At the end of 2013, inflation rate dropped at the historical rate of 1.074%against 2.72% recorded in 2012. As for the exchange rate, it has remained stable on the overall market since February 2010. Besides, the Government has put in place a set of vigorous reforms aiming at having a decreasing the role of American dollar in national economy, “dedollarization”, developing financial markets and improving public finances management. Paying the civil servants, the police and the army's salaries through the banking system is now effective nationwide. As a result, civil servants falling under these socio-professional categories can be indirectly controlled.
In addition, the payroll mechanisms, which impact on the currency circulation, have actually been cleaned up. We are expecting to build on these achievements in order to consolidate the macro-economic stability and accelerate necessary structural reforms to promote a sustainable and all-inclusive growth.

With respect to governance and natural resources management, the Board of the Extractive Industries Transparency Initiative (EITI) declared the DRC a
''compliant country'' during its 2nd July meeting held in Mexico.

Lastly, Moody's and Standard and Poor's respective rating services confirm the DRC's achievements in the area of economic governance.

V. Economic potential
Missions planned by Dutch business men by the end of the year will enable them to see for themselves the economic opportunities of the Democratic Republic of Congo: a country endowed with immense and various natural resources. The Democratic Republic of Congo remains one of the African ''giants'' with an Area of 2,345,000 km2.The country is rich with various minerals, namely, copper, cobalt, silver, uranium, lead, zinc, cadmium, diamond, gold ore, tin, tungsten, manganese or coltan.
The Democratic Republic of Congo's farming potential is estimated at 80 million hectares of arable land, 4 million hectares of which are irrigable. It has a grazing capable of hosting 40 million cattle. Its fish production potential is estimated at 700,000 tons a ye

VI. Improving the business climate
As far as business climate is concerned, notable progress has been made but needs to be sustained.
In fact, business creation used to be a serious nightmare. A minimum period of 155 days was needed, 13 forms to be filled in various Ministries and administrations, and more than 3,500 US dollars used to be disbursed.
Since the setting up of the Business Creation One Stop Shop in April 2013, a maximum of 3 days is needed and only 120 US dollars are required for companies and 40 US dollars for private organizations.
To fight legal and judicial uncertainty and strengthen investments, the DRC has joined the Organization for the Harmonization of Business Law in Africa, OHADA in acronym. To strengthen the legal framework, commercial courts are being gradually established nationwide, and for the time being, they are already available in the major cities of the country.
In the same vein, the law on the ratification of the 1958 New York Convention on the arbitrator's sentence was enacted on 26 June 2013, in order to improve the judicial security of financial and commercial transactions.
Concerning the cross border trade, several changes have been implemented, after a review found several unnecessary procedures, that is, respectively 44 days and 63 days for export and import procedures. The use of Sydonia Word software has partially resolved the customs procedures. Currently, it is taking 13 days for export and 25 days for import procedures.

In this regard, the Government has signed a contract with a private operator to establish a comprehensive One Stop Shop for external trade. In the coming months, this new system will computerize customs procedures and speed up all the formalities at very competitive costs.
In terms of tax payment, the main reform was the introduction of the Value
Added Tax (VAT) set at 16%, in January 2012. The payment deadline has been considerably reduced, the tax periods are merged and the single tax return form is being finalized. The income and profit tax rate has been reduced from 40 to 35 %.
Remarkable efforts are underway to make the business climate more attractive in order to ensure legal and judicial security of investments.

VIII. Liberalizing the Insurance sector
The Government has already submitted to the Parliament a draft Code for the liberalization of the Insurance sector. The new Insurance Code will enable the private sector to better position themselves in the Congolese insurance and reinsurance market which has been for too long the monopoly of the Societe National d'Ássurrances (National Insurance Company).

IX. Improving base infrastructure
One of the priorities of the Government program involves the construction of basic infrastructures for several sectors amongst which multimodal transport (inland navigation, road, railways, airways and maritime) and agriculture. These infrastructures must account for both demographic and technological developments the country has experienced.
I have no doubt that the intervention of Dutch companies, known for their expertise and experience in this sector, and the expected subsequent investments will have a strong incidence on the economic growth.
Hence, public-private partnerships can be concluded so as to revamp agricultural sector, through agricultural business parks, railways rehabilitation (including locomotives), airport infrastructures (runways, air control tower, technical blocks and terminals, rehabilitation and modernization, airport navigation, equipment), acquisition of beaconing and dredging equipment, etc.

X. Conclusion
I remain confident that your participation to this Business meeting will help to rewrite a new page of business relationships and to increase economic collaboration between the Democratic Republic of Congo and the Kingdom of the Netherlands. Like the Dutch company, Heineken/Bralima, one of the leaders of the breweries in the DRC, I therefore would urge investors from the Netherlands to come and explore the Congolese markets.
As Professor Peter Drucker put it, “the best way of predicting the future is to create it”.
The purpose of speech was to present to you a snapshot of the Democratic
Republic of Congo, a country that is coming out of the rubbles thanks to the
determination of the Government, in accordance with the vision of the Head of State with the goal of becoming a emerging economy within the next two decades.
Now is the time to take your boldest risks and invest in the Democratic Republic of Congo in order to extend your businesses. Indeed, your investments are needed to hasten the future of an emerging Congo.
I therefore stand as a free of charge lawyer of foreign investors in the DRC.
Thank you for your attention.