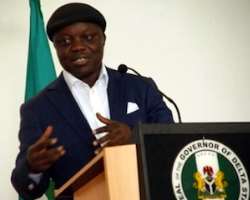 If anyone is still wondering why Delta State Governor, Emmanuel Ewetan Uduaghan keeps getting good ratings and all his positive reports published in some section of the New media sites and soft sell magazine, search no further.

Exclusive information at our disposal reveals that Uduaghan has succeeded in buying over some of such medium in order to give him good ratings. According to our sources, some of the online mediums were paid Six hundred Thousand Naira (N600,000) in the name of advert for three months, while the soft sell magazines get as much as One Hundred Thousand Naira (N100,000) monthly.

More revelation unveils that even the hard news media and community journalists who reports from the State are not left out in this unholy largesse as they are also paid monthly. The Sapele correspondent chapel of the Nigerian Union of Journalists whose executive we can authoritatively report is illegal are paid a paltry sum of N5,000 monthly, while the State Council of the union feeds fat from the governor cash for story.

According to our sources, “apart from Sahara Reporters and Secrets Reporters who do not take adverts from government, especially the non performing ones, all the other media have sold their conscience to Uduaghan. They say it is advert but the truth is that it is used to bribe them. The man has bought over the strong social media. Anytime you see his face on any media, just know that the particular media is under his payroll”.

Efforts to get to the State Information Commissioner, Hon. Chike Ogeah were not successful while Text message sent to his Special Adviser, Pius Mordi was not replied to as at press time