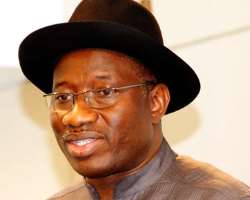 President Goodluck Jonathan on Wednesday said the female national football teams had been putting up spectacular performances because of the high level of discipline among them. Jonathan spoke when the Super Falcons formally presented the golden trophy they won at the just-concluded African Women's Soccer Championship in Windhoek, Namibia to him in Abuja shortly before the commencement of the weekly Federal Executive Council meeting. 'Today, we are quite pleased to receive the cup from you. You have made the country proud. Nigeria is known to be a soccer country. 'The male teams have been doing very well.  But somehow sometimes, because of certain internal crises, we tend to lag behind. 'But the female teams have been doing wonderfully well. We didn't expect that you would win, but still, that you won for this country is remarkable. 'We thank you for your commitment because it requires discipline to achieve this height. No matter how good you are, even in the academics, you see brilliant boys and girls who ordinarily would have made first class but because of lack of discipline, they don't make it. 'So, if there is no discipline, you cannot excel in anything. You have the skills but you have also shown discipline that made you excel. We will continue to adore you,' the President said. Jonathan promised to formally receive the victorious players on November 5 in order for the Federal Government to properly appreciate them. On his part, the minister of Sports and chairman, Sports Council, Tamuno Danagogo had in presenting the trophy to the President, extolled the virtues of players for displaying high level of dedication and discipline which he said was unprecedented. 'We bring you good tidings from Namibia. The legendary good luck is still continuing in sports. 'We have been dominating female football in Africa over the years although we lost in 2012. 'Due to your (President's) support and tenacity, we won. The discipline and dedication displayed by the players during the tournament is unprecedented,' he said.