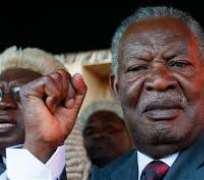 President Goodluck Jonathan said he received with sadness the news of the death of President Michael Sata of Zambia in a London Hospital on Tuesday.

In a statement issued on Wednesday by his Special Adviser on Media and Publicity, Dr. Reuben Abati, commiserated with the government and people of the country on the incident.

He said the late President would be remembered for his uncompromising stand against neo-colonialism and any semblance of renewed imperialism in Zambia and Africa.

'On behalf of the Federal Government and the people of Nigeria, President Jonathan extends sincere condolences to the government and people of Zambia on the death of President Sata who has led his country since 2011.

'President Jonathan's deepest sympathies are with the people of Zambia and President Sata's family as they mourn their leader, patriarch, nationalist and patriot who will always be remembered for his uncompromising stand against neo-colonialism and any semblance of renewed imperialism in Zambia and Africa as a whole.

'As they mourn President Sata and prepare to lay him to rest, President Jonathan urges the brotherly people of Zambia to commit themselves fully to a peaceful and orderly succession in keeping with the principles of democracy and the country's constitution.

'He prays that God Almighty will comfort the people of Zambia and grant them a worthy successor to President Sata who will keep the country on an even keel and ensure that it continues to make steady progress for the benefit of its people,' he said.