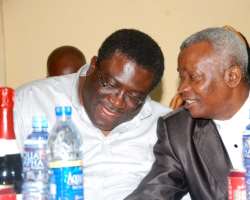 A Pentecostal Bishop, Rt. Rev. Dr. Innocent Erimujor, has made case for the return of Rescue Mission Government come 2015.

This statement was made last Sunday during a fund raising dinner at Mayfair Suit, Owerri, Imo State, organized by the Prelate of Church of God in Christ Rt. Rev. Dr. Innocent Erimujor with a view to empowering the less privileged in the vineyard especially the ones in the rural areas.

The Bishop declared that having weighed the performance of Owelle Rochas Okorocha led Rescue Mission Government in comparison with what was obtainable in the past, he will vote for the present government to continue. He assured the guests of his support for the sake of development of Imo State.

He however showered encomium on Governor Okorocha for his numerous achievements in the area of infrastructure, education, security and creating an atmosphere of freedom for the citizenry. He submitted that he will join hands with other well meaning minds in the State to pursue this course to a

Continuing, he said, "Imo State is blessed with good Deputy Governors but none of them has been so distinguished to the extent of becoming the best Deputy Governor."

He thanked the Deputy Governor for graving the occasion saying his presence alone was much more satisfactory to him than any other thing.

In his remark, Prince Eze Madumere, the Deputy Governor of Imo State narrated when he first met with Bishop Innocent Erimujor when he first worshipped in his church with Governor Okorocha over ten years ago. He said Bishop has remained a tool in God's hands. He also commended him for always being on the path of the truth.

He encourage him to continue in his chosen path of winning souls for the Kingdom of God and moulding the people towards becoming the better and patriotic citizenry.

Speaking further, The recently crowned "African Personality", in the last Pan African Magazine Award in Netherlands, The Voice, called on the clergy to carry on the campaign of moral rejoin action especially on the part of youth. He hammered on the need for the parents to begin to talk their children out of being used as thugs by desperate politicians.

He however advised for all to get involved in the political process towards ensuring they vote in their choice candidates saying that is the only way people could make the desired change possible.

He therefore, called on the clergy to mobilize the people towards getting positively engaged in political process starting from the Voters Registration exercise and proper education on voting processes.