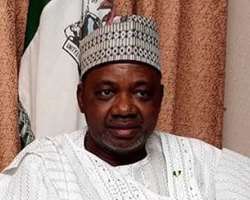 The Federal Government has said that its commitment to the provision of good governance to the people of Nigeria is unwavering, adding that it was the responsibility of all tiers of government in order to meet the needs of the masses.

The was made known on Tuesday by the Vice President, Arc Namadi Sambo at the Institute of Directors (IoD) 2014 Directors Conference with the theme: 'Imperatives of Good Governance in Promoting Investment Opportunities', held in Abuja.

Sambo who was â€Žrepresented by the Head of the Civil Service of the Federation Danladi Kifasi, stated further that the private sector also has the responsibility to partner with the various government agencies in ensuring that this noble objective is achieved.

'I am glad to inform you that this administration considers as very important the task of providing the enabling environment for businesses to thrive in Nigeria. Our guiding principles in the effort to promote the concept of good governance have been accountability, transparency, rule of law, responsiveness, equitability and inclusiveness. I am delighted to tell you that the stability in the Nigerian market has resulted into various partnerships with foreign investors in various sectors of the economy,' he stated.

The Vice President said that â€Žthe reform that is ongoing using Financial Reporting Council (FRC) as a vehicle of compliance was one of the testimonies that the present administration was serious about the desire to transform all areas of the nation’s economic activities, adding that the essence of these reforms and compliance is to attract more investments into the Nigerian business environment”.

Earlier, the President and Chairman of Council, Institute of Directors Nigeria, Mrs. Eniola Fadayomi had said there was need to entrench good corporate governance and best practices in Nigeria particularly with focus on responsibility, integrity, accountability, transparency, self-regulation and effective internal control systems as one of the major destinations for foreign direct investment

According to a statement by the PDP State Publicity Secretary, Dr. Okey Eze, it said that the attention of the Party has also been drawn to the erroneous impression being created by some 'disgruntled' elements in the State who are desperately looking for any opportunity to create crisis in the Party for their selfish political ambitions, in an attempt to misinform the public and discredit the legitimate process that was followed by the State Executive Committee of the Party in appointing Chief Ikeje Asogwa as the Chairman of the Party in Enugu State, pending the conduct of election into the said office at a State Congress as provided by the Constitution of the Party.

Reacting to a report in the media alleging that the Enugu PDP is in crisis and that 'INEC may reject Enugu PDP Candidates', the party said that the report is 'unfounded and baseless'.

'That it is spurious for the Deputy Chairman of the Party to allege that he did not preside over the said State Executive Committee meeting that produced Chief Ikeje Asogwa as the new Chairman of the Party. Nothing can be farther from the truth. Consequent upon the presentation of the resignation letter of Engr. Vita Abba on the floor of the State Executive Committee meeting by the State Party's Legal Adviser, Barr. Emeka Igwesi, whom the former Chairman asked to assist him tender the letter on his behalf, the said Deputy Chairman presided over the meeting, in line with Articles 46(1) and 35(3) (b) of the PDP Constitution.

'That in the course of the meeting, which he (Elder Ajah) was presiding over as the acting Chairman, he directed that the meeting be postponed indefinitely, which was unanimously turned down by the SEC, considering the need to fill the vacancy immediately with another person from the same zone with the former Chairman (the Deputy not being from the same zone with the former Chairman) in line with Article 47(6) of the Party Constitution, pending the conduct of election to fill the vacancy created by the resignation of the former Chairman.

'That Elder Ajah's outburst is mischievous, embroiled with hidden agenda and a calculated attempt to undermine the integrity of the SEC which is the highest organ of the Party in the State before the State Congress, ably empowered by the PDP Constitution to take the decision it took in appointing Chief Ikeje Asogwa as the new Chairman of the Party in Enugu State, in accordance with the Party Constitution.

'That Enugu State PDP is not an exception where such issues occurred and similar steps were taken by the appropriate organs of the Party at all levels, including the National Executive Committee of our Party.

'That the Party, therefore, calls on the general public and our Party members and supporters to disregard the false allegations being deliberately peddled by an imposter, the Deputy Chairman over the democratic process taken by the State Executive Committee of the Party in appointing Chief Ikeje Asogwa as the new Chairman of the Party in Enugu State, as it was meant to mislead and distract the Party from discharging its constitutional duties'.