How Fayemi made Atiku to commission uncompleted General Hospital 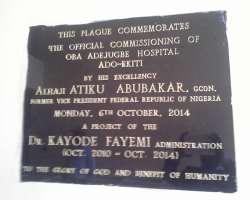 Here is the inside of Oba Adejuyigbe General Hospital, Ado Ekiti that was COMMISSIONED on October 6, 2014.

As at today, the building is still being painted while other structural works are still going on there. Only the outside was painted before it was commissioned.

No single medical equipment is in the building!
These are pictures of how the hospital is as at today…

The post How Fayemi made Atiku to commission uncompleted General Hospital appeared first on Pointblank News .