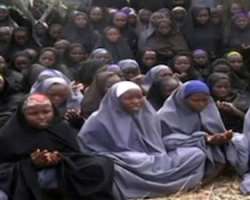 He soon began to threaten me with a knife to have sex with him and when I refused, he brought out his gun, warning that he would kill me if I shouted.

'Then he   began to rape me every night … I had never had sex before; it was very painful and I cried bitterly because I was bleeding afterwards.'

These were the words of a 15-year-old girl, who was abducted by Boko Haram and forcibly married to one of its commanders in a camp in the Sambisa Forest, Borno State.

The girl, according to a report by Human Rights Watch, was abducted in 2013 but she escaped after four weeks in captivity.

The teenager is one of the five girls that personally recounted their ordeals in the publication which was made public on Monday. She said that after her marriage to the commander who was in his early 30s, she was ordered to live with him in cave.

The experiences of three others who   suffered sexual violence were narrated by witnesses in the 63-page HRW report titled, Those Terrible Weeks in Their Camp: Boko Haram Violence against Women and Girls in North-East Nigeria.'

The publication provides details of how hundreds of girls and women aged between 15 and 22 were being made to suffer other forms of abuses and used for ambushes.

The HRW said in the report that it spoke to 47 witnesses and victims, including some of the Chibok schoolgirls kidnapped from their hostel in April this year.

The group also described how some of the Christian abductees were ordered to convert to Islam or be executed.

It claimed that four of the eight sexual assaults it recorded occurred after the girls and women were forced to marry   Boko Haram combatants.

According to the HRW, before 'marriage,' the commanders appeared to make some efforts to protect the women and girls from sexual assault.

It said that in two cases, the insurgents   took advantage of the absence of a commander and sexually abused abductees who had yet to be 'married.'

An 18-year-old victim also described how an insurgent sexually abused her when she went to use the bathroom.

She said, 'I did not know he followed me when I walked a short distance away from the tree under which we slept. He grabbed me from behind, roughly fondling me while trying to take off his pants. I screamed in fright and he hurriedly left me as I continued to shout for help.'

Another woman, who was raped in 2013 in one of the militants' camps near Gwoza, described how a commander's wife seemed to encourage the crime.

'I was lying down in the cave pretending to be ill because I did not want the marriage the commander planned to conduct for me with another insurgent on his return from the Sambisa camp. When the insurgent who had paid my dowry came in to force himself on me, the commander's wife blocked the cave entrance and watched as the man raped me.'

Another woman aged 19,   who was married and had children, described how she and one other woman were raped after having been abducted   in April 2014.

She said, 'When we arrived at the camp, they left us under a tree. I managed to sleep. I was exhausted and afraid. Late in the night, two insurgents woke me and another woman, saying their leader wanted to see us.

'We had no choice but to follow them; but as soon as we moved deep into the bush, one of them dragged me away, while his partner took the other woman to another direction.

'I guessed what they had in mind and I began to cry. I begged him, telling him I was a married woman. He ignored my pleas, flung me on the ground, and raped me. I could not tell anyone what happened, not even my husband.

'I still feel so ashamed and cheated. The other woman told me she was also raped but vowed never to speak of it   as she was single and believes that news of her rape would foreclose her chances of marriage.'

The HRW had previously documented the widespread abuses carried out by the Nigerian security forces in responding to the attacks by Boko Haram.

However, the rights organisation asserted that few members of the security forces implicated in 'serious violations of humanitarian and human rights law, including violations against girls and women, have been prosecuted.'

It advised that 'to ensure accountability, Nigerian authorities should investigate and prosecute, based on international fair trial standards, those who committed serious crimes in violation of national and international laws during the conflict, including members of Boko Haram, security forces, and pro-government vigilante groups.'

The group said that 'in addition, the government should provide adequate measures to protect schools and the right to education, and ensure access to medical and mental health services to victims of abduction and other violence.

'The government should also ensure that hospitals and clinics treating civilian victims are equipped with medical supplies to treat survivors of sexual and gender-based violence.' Punch