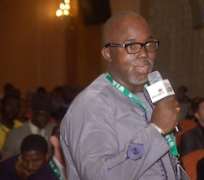 President Goodluck Jonathan is scandalised by those who are perpetuating crisis in Nigeria's football and has invited President of Nigeria Football Federation, Amaju Pinnick to know the cause of the latest problem.

A Jos High Court last week nullified the election that ushered in a new board for Nigerian football September 30.  With the transparent election, football enthusiasts thought that it marked the end of the crisis that started when the new sports minister, Tammy Danagogo appointed a new secretary to run the affairs of the federation immediately after the Brazil World Cup.

The minister said that he did so following a court ruling declaring the former board of Aminu Maigari illegal. He was new in sports and apparently did not know that world football governing body, Fifa, abhors taking football matters to ordinary law courts.

The Court Of Arbitration handles disputes in football. All affiliates of fifa abide by their rules and regulations otherwise the offending country faces sanction.

And Nigeria has repeatedly flouted fifa rules. Last week's court ruling so infuriated top executives of Confederation of African Football, Caf and Fifa that they were going to ban Nigeria just before Falcons won the African title in Namibia on Saturday.

The minister who was in Namibia prevailed on them to give Nigeria another chance to resolve the problem.

Nigeria's case became more disturbing to Fifa and Caf when they gathered that security men stopped Pinnick from traveling to Namibia for the final of Africa's Women Football Championship which Nigeria won, beating Cameroun 2-0

The security men, we gathered, said that they were simply following instructions from above.

A football loving friend of President Jonathan who accompanied the President on pilgrimage to Israel and who was monitoring the goings on in Nigeria informed the President and he quickly directed that Amaju Pinnick should see him on his return to Nigeria.

'Somebody told Mr. President in Israel and the President frowned at the development. He has asked Amaju to come to Abuja to see him,' a source said Sunday night. The BFF President may meet with President Jonathan between today and tomorrow, we gathered.

Meanwhile, the case will come up in Jos tomorrow. NFF had appealed against the ruling and the matter will be heard tomorrow. Fifa may descend heavily on Nigeria with a ban if the court does not vacate the ruling.

Amaju is expected to send a letter to Fifa today appealing for a 24 hour grace for the matter to be settled. And if by Wednesday morning the court does not vacate the order Nigeria will face sanctions which is exactly those perpetuating the crisis appear to be courting.

Ex international Victor Ikpeba yesterday appealed to sports minister,  Danagogo to be firm and save Nigeria's football.  He said that Chris Giwa, the man who took football matter to court did not care about Nigeria's football otherwise he would have respected the full congress that elected the Amaju Pinnick board. In the congress that the minister once initiated delegates walked out and a kangaroo election was said to have elected him.

Fifa did not recognise the election. But Giwa has not given up, disturbing the peace of Nigerian football and now attracting the attention of President Jonathan who will likely be decisive on these matters.

Issa Hayatou, the Caf President said Sunday that the world was fed up with Nigeria's shameful actions in football. Vanguard